The hive was perched between the branches of a magnificent oak tree. Glorious and golden, it dominated the western honeybee world. The land of the free they called it – the Promised Land. Or so they said. But I wasn’t sure anymore. I had lost my employment months ago because there were too many worker bees and not enough work. I was bored of repetitive days leading me nowhere.

In the coming weeks reports of a new queen filtered through every cell of the hive. Mendacium. Her arrival sparked controversy. I loved our old queen – Veritas – she was a favourite with the bees. Yet, after hearing the accusations that arose, my belief wavered. The new candidate even questioned her origins.  With doubtful hope, I attended Mendacium’s inaugural speech. The walls pulsated with chants of “Make the hive great again!” Our queen arose and presented what was to become our future. It was clear and simple:

“We will become second to none and we will put millions of our bees back to work as we rebuild.”

I was captivated. Finally, I felt listened to. She spoke of driving them out – those who flocked over in their thousands, stole our resources; she would build a wall to prevent the entry to those who stole our livelihood. She spoke of putting the hive first. We would make more propolis, honey and combs than ever before. It all made sense now.  It wasn’t my fault; it was theirs. For too long we had let them take control – no longer would we be powerless.

The drones flew around the hive. Speaking in monotones, they regurgitated the words of our queen. “We will be great again.” Questions formed in my mind as they whirred and chanted. How? I wondered. The brainless drones offered no explanation. Only empty answers and thoughtless assurances.

It was quickly announced that Mendacium had pulled out of the Hive Agreement.  She said we had an ‘unfair deal’. The HA was an organisation to protect the environment we lived in, making sure we pollenated all of the flowers equally and correctly. Our hive was large and so pollenated more flowers and submitted more bees than any other contributing hive. It was announced that this was bringing us down. We were sacrificing too many workers to support hives that didn’t pollenate enough flowers. Each week the HA gave us a list of what to pollenate.  But instead our new queen declared that we were only to pollenate orchids which were prohibited by the HA, who labelled them as ‘endangered’. Mendacium insisted they were at ‘record levels’, and they produced the best pollen of all. So we scoured the fields in search of the flowers, but there were few to be found. I worried about a lack of pollen for materials, but Mendacium told us we were creating more honey under her leadership than anyone else’s. Having seen our dwindling stocks, I didn’t understand, but was swept up, nevertheless, in the search for this superior pollen.

Our combs grew bigger, our wall grew higher and according to Mendacium our meals became more nutritious, yet I constantly felt hungry. Another message arrived from the drones. Humans had ‘sprayed’ a neighbouring hive. Arriving in their thousands, displaced bees buzzed at our hive. Our queen ordered for the wall to be built quicker and thicker than before. Otherwise we ran the risk of letting them steal away our glorious future.

The hive was a hub of activity. Wax was piled at our borders. However, the higher the wall, the worse things got. The hive became dark, hot and claustrophobic. Infections spread, and hundreds of bees became ill. Confined within these thick walls, I flew around, bumping into combs that now loomed like tired mountains swallowing our hive. The biggest of which sat in a large dip that was appearing in the centre of the hive. Each day it sank a little further.

At the barricade, worker bees, meant for flying, stomped across honeycomb floors, piling layer upon layer of wax to secure our home. Peering over the top of the tower, I watched. They had arrived at our border. Limp wings fluttered determinedly at our doors. Young bees tugged on adults’ wings before dropping down in exhaustion. They were different than I thought. Like us. I felt sick. What were we doing? Surely they needed our help? I let my load of resin drop to the floor. Immediately, a drone buzzed next to me: “Pile it high! Block them out!” I stared into the tiny lenses of its eyes. Blank. Uncaring.

When the wall was complete, it sealed everything out and us in. Our stocks were the lowest they had ever been. The combs stood like statues of stupidity, sinking deeper each day. I looked at the widening abyss. How could we have let ourselves be fooled by such lies? Together we pounded on the walls. Our persistent thuds echoed through the hive, accompanied by the loudening creak as the combs sunk lower and lower. And, then, one day, it was over.

The hive lay scattered across the forest floor. Her magnificent combs, too heavy for the hive to handle, lay in piles of dust. I fled, darting from hive to hive, begging for refuge. Eventually, I stumbled across a series of hives run by humans. I’d heard the rumours: the compact living spaces, harsh conditions and long work hours. A voice nagged at me ‘Never trust a human – those-without-wings’. Who knew what they would do? Use chemicals; monitor my every move? But what other option did I have? Surely life in the apiary wouldn’t be that awful? Perhaps we could learn to co-operate? They might take all the honey for themselves, but at least the hive would be prosperous. At least there would be work. And foundations on which to build a new colony, a glorious and golden cornucopia that will outshine all others in the world. 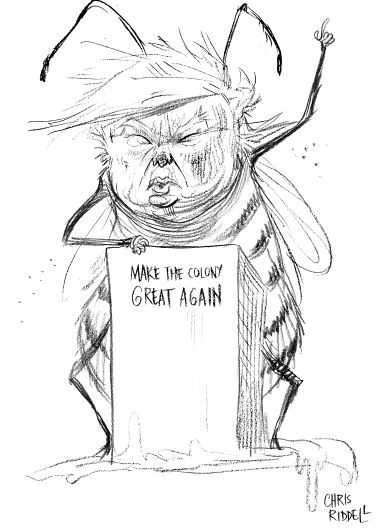