I considered myself incomprehensibly lucky in the winter of 1970 for two reasons. Firstly, the 4th Infantry Division in which I had served in the Vietnam war had returned home to Boston in time for Christmas. Secondly, I was reasonably unscathed, which could only be said for two other boys on my street, as the rest now lay over eight thousand miles from their mothers, undisturbed in the Asian earth. At the time, after waking every night in sweat soaked bedsheets with clammy hands and panicked breath, I would wonder if they were better off, the boys who didn’t make it. I didn’t say this out loud for over forty years until, when at seventy-six years of age, I first spoke about the thoughts that had loomed at the horizon of my mind for decades, like clouds that carry the promise of thunder, at the edge of an otherwise perfect day.

Now you may be thinking that I am one of those old folks you see with a newspaper sipping his coffee while looking out on the street and grumbling about this and that and how that wouldn’t have happened in my day let me tell you. But I’m not. Whilst you can find me peering over the edge of the sports’ section in my local diner, I’m often lost in thought and the only shame or disappointment I feel about the world in those moments, is toward myself. Toward my generation. Toward all the doors I closed, forcefully and with pain, toward all the words I spat and punches I threw with a burning anger that came from only one place: an unbearable oppression of who I truly was.

Over the years, this anger has dissipated and a quiet, blue melancholy that swaddles you at night and kisses you good-morning when you wake up, has followed. It was Wednesday of last week and I was standing at my window, watching the world go by, as my father would say, when I saw them. Two young men walking down the street, hand in hand. I studied them for a long time. The older of the two raked a hand through his hair before pushing his sunglasses up onto it. He slowed his pace and the blonde man accompanying him turned so that they were no longer walking side by side but facing each other, still. The one with dark hair placed a hand against the other’s cheek, and paused for a moment before saying something, which resulted in the blonde boy’s eyes creasing up and his white teeth to show
momentarily. They kissed. Though only for two fleeting seconds the street seemed to slow its activity. Some people turned and observed. Few cared. I felt a soft jealousy. A single tear carved its way down my cheek, its path obstructed and slowed by the lines in my face.

I tried for so long to walk away from a life that I know would’ve allowed me to live my days as the person I truly was, but that life would’ve meant bidding farewell to my family and friends, who when I was younger would shout an aggressive “Faggot!” to anyone who, in their eyes was a lesser person – maybe someone who had wormed their way out of serving in Nam or lost a game of pool in a bar or perhaps the bottom inch of their jeans was turned up, God forbid. I joined in in all this, seemingly forgetting both my humanity and the occasions where I had been, by derogatory definition: a faggot.

These occasions, although few, were profound. Moments of escape that I had found and treasured over a span of eighty-four years, I would guess totaling a mere month out of one thousand and eight that I have lived through. Some were one night happenings, the result of bourbon, a lack of inhibition, hushed tones and touches of the forearm at a bar, far away from home. It has only been recently that I have seen these in my mind’s eye for what they really were. I know what you are thinking: drunken, urgent fumblings. But you are wrong. No, my moments were tender. I would lay with another man with eyes that danced with lust but with kindness too in a room of a motel, the kind of motel that people pass and make some remark about, with a raised eyebrow and a knowing smirk. I’ve heard these comments
more times than I care to remember, and every time I do I bite my tongue to prevent myself from wrapping my hand around the speaker’s throat, pushing them again the nearest wall and saying that the only reason why people have to do such acts under the cover of darkness in a dirty room is because they can’t do it in the safety of their own fucking homes.

I had some longer flirtations too, mostly when I was younger, before it had been drilled into me that what I was doing was, in short, wrong. I was in love with a boy two streets down from me, Danny was his name, and I used to play baseball with him every Saturday from ages seven to seventeen. It was the kind of love that cherishes touches of the hand when passing a beer can or cigarette, the kind that is made up of soft, nervous kisses in the locker room after practice, the kind that is realised too late and that circumstance cuts short.

Danny was in my Infantry Division in Nam and was, for lack of a better word, obliterated by an SA-7 Grail, two days before we were due to be taken the hell out of there. I couldn’t cry for him at the time. We were from different social circles and different religions too; crying may have been too much of a give away. So I took all that grief and held it in the pit of my stomach for over fifty years before I visited his plaque in the local cemetery one cold September day and sobbed into the stone and soil. After that, I tried to push the thought of Danny away, and I succeeded for a little while, but it didn’t last.

So this is me. I’m old now, and getting no younger. I live in a modest house that I’ll die in someday, hopefully with little or no pain. It gives me comfort to know I’ll leave this world just five minutes from where I came into it. I have a long list of vices and a long list of medical problems to show for it, which will get the better of me sooner or later. I’ve tried to fly straight my entire life. I’ve voted, enlisted, protested and suffered so that others don’t have to. I like to think that right now, there is a young man out there somewhere who is living his life with honesty, who is in love and doesn’t have to hide it from his parents, who can wed his man, and lie next to him in his own bed and kiss him in the street and savour it, and not lose anyone he holds dear to the pointless suffering of war. It soothes me to think  that if I had an unwrinkled face and a full head of hair in today’s age, then I would’ve been able to cherish my Danny. I would’ve loved him. And he, I hope, would’ve loved me, too. 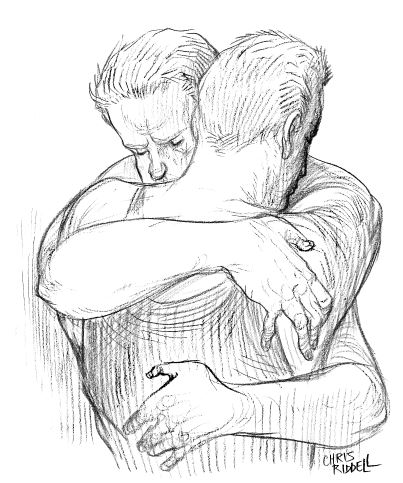