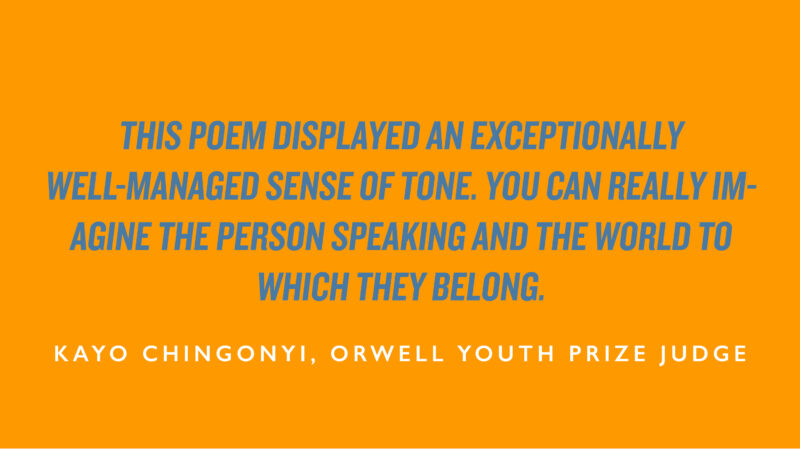 the fundamental flaws in humanity –

while they are still growing

only the positive traits can be deposited.

they can all be designed.

born from a perfect system.

Obviously, there are different services…

Some of the more “underprivileged”

choose to play by the genetic lottery –

it used to happen

(No wonder society was flawed, they cried!).

The Company’s slogan is:

imagine what free must be.

This poem displayed an exceptionally well-managed sense of tone. You can really imagine the person speaking and the world to which they belong. Clearly a lot of thought has gone into the use of poetic form which is evidenced in the artful line breaks as well as the way the poem takes George Szirtes’s brilliant advice on poetic first lines and last lines (‘step on heavily, step off lightly’). Kayo Chingonyi, Orwell Youth Prize Judge

Molly Hammerton-Woodhouse is a senior Orwell Youth Prize 2020 Runner Up, responding to the theme ‘The Future We Want’.

What was the inspiration for your piece?
It’s been a concept I’ve been working on for a while (since my GCSEs) based on something I had learnt in Biology. I’ve always been a fan of dystopian fiction, so I wanted to write about a future where society believes they have solved the problems faced by humanity currently by using a science which is seen as unethical. However, it becomes clear to the reader as they continue that there is a problem with this system and has not really changed anything, contrary to what the narrator believes. I wanted to comment on how we can’t improve these things using science (arguably the easy way out), instead we need to communicate with each other in order to create more equality in society.

What is your one tip to young writers?
Write however and whatever you want. I know as an A-level English student that when you write anything for school, you have to keep in mind what the person who is marking will be looking for: spelling, grammar, adjectives, and adverbs. That’s fine for school, but when you’re writing for you that doesn’t matter. You don’t have a success criteria to meet, you just have the message you want to write down, no matter how you want to convey it to the world. Write without constraints first, worry about editing later.

Which writer/s most inspire you and why?
There are so many to choose from! One of my favourite books is Warm Bodies written by Isaac Marion. I love Marion’s writing style as there are some beautiful lines that have stuck with me ever since I read it and I hope that my writing will have that much impact on someone. I also adore Kerri Maniscalco’s Stalking Jack the Ripper series and Stephanie Garber’s Caraval series. They both have strong female leads who are witty and not emotionally cold; they overcome such hardships and the writers, particularly Garber, use such gorgeous and unusual metaphors to create the worlds they are set in.