What he left me with 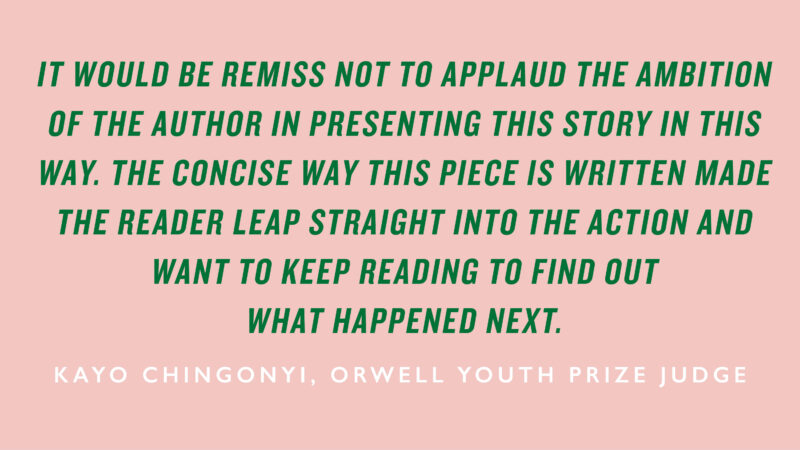 Seven. He took me to church for the first time. The quintessential eldest child: staid, astute
and a keen leader. The drill sergeant: he issued commands and I obliged. In my
neighbourhood characterised by deprivation, church was not a building but the unity
between the people within it. I understood that we had to rely on a duty of care towards our
neighbours. The dilapidated buildings and overwhelmed public systems were mere
reminders of our inferiority. The government and police could never replicate that loyalty we
upheld towards one another. The most poignant memory I have from that day was after the
service when we passed an ice cream truck. I was in a mood, intensely craving an ice
cream laden with toppings. He saw. He saw me and my longing glances and satisfied my
desires. He watched me erupt with happiness while he stood beside me with a howling
stomach. He never did hesitate to appease me.

Just before eleven. He got a job for the first time. He walked up to Mama and told her he
was taking control, smirking excitedly at the tantalising promise of financial freedom. To
him, that first check was a symbol of hope, emblematic of a better life. Determined to find a
way to escape poverty’s vicious cycle and the streets, he spent hours hustling. Washing
dishes at the local diner for minimum wage until his hands were embroidered with vibrant
patches of eczema while working to maintain his GPA. He envisioned that he would
become somebody, inspiring us in the process. His goals were hyper-focused and
desperate to be fulfilled.

Only thirteen. He confirmed what I already knew about this world. I was poor, I witnessed
poverty in the face of my mother; her premature wrinkles told the story of a life tainted by
pain, suffering and hard labour. Capitalism’s demands saddled her with myriad health
problems. Late notices in a heap by my front door regularly reminded me of my dire
financial situation. Gentrification had brought burgeoning rent which was impossible for my
mother to meet on her own, the need to simply survive forced her to take on every job she
could find. My clothes were from thrift stores before the gentrification of thrift stores only
highlighting our position within the societal hierarchy. The sirens which played vociferously
randomly resulted in impulses of primal fear. Death permeated our community; connecting
us but also affirming that although suburbia was 40 minutes away, the gap between us and
them was impossible to bridge. People morphed into products of the environment – those
that gave you hope at fourteen had lost their ‘potential’ by seventeen. He echoed to me the
same words my father had once said, when you’re black, you do not get second chances.
Privilege was a concept he was extremely familiar with: his hustle to achieve college offers
had amounted to nothing. It did not matter, he could not pay his way through a 4 year
program. I saw him as a superhero, slashing through all the weeds in his path. His powers
meant nothing in a world where money and connections were given greater importance. His
work had not amounted to what he deserved: a bitter reminder of the cruel relentlessness of
nature’s give-and-take and the myth of meritocracy.

Three weeks into my sophomore year of high school. I hugged him for the last time.

A month later, all I had was anger and lasts.

Jayden Brown. Mistaken for the antithesis to who he was and he’s neither the first or last. In
their eyes, he was not someone who cried regularly at the film, Up, but the monolithic black
man. Unarmed but his skin colour was the only weapon they needed in order to launch the
offensive. My warnings about law enforcement had been innumerable, I had witnessed the
movement spread, there is an inconceivable dichotomy between the pursuers of justice and
their injustice. Three shots. With three shots, he no longer had a pulse or future. No
hesitation. No second chances. Just three taps on the trigger. His heterogeneity ignored,
they warped his soft brown eyes into images of immorality and aggression. Seizing his
liberties on the basis of presumptions and misguided bias, my hope in justice had been
relinquished. His Suppression, repression, further regression, is that what the black
experience is deemed to be? Is this what it means to be black? Left with condolences and
a corpse. The only person who invested his valuable time into the triviality of my life had
been stolen from me, deserting me with the memories of who he was in the past and who
he could have been. The aftermath of police brutality: kaleidoscopes of pain, anger,
devastation, emptiness, questioning the system. My agony became faded whispers,
shadows of my pain. I yearned for something other than numbness, rooted in confusion and
shock, perceptible in every neuron. I needed him. My shattered heart urged to feel a
semblance of emotion. Broken with a turbulently shaken worldview. He was gone.

When I am 20, they will say the names of those lost to police brutality, those lost to poverty,
those lost to our system which thrives on exclusion and marginalisation. He will not become
a statistic nor a memory in my brain nor a name you retweet to never acknowledge again.
Nor will they hide behind the misguided view that racism has been eradicated when
communities are still stuck in its slipstream. Quashing the myopic status quo we uphold
and confronting ever-persisting issues for a society which is not racist or colour-blind but
colour-brave: valiant enough to see race and destroy the institutions which function to
divide. Our unconscious biases will be relentlessly attacked, not deeply suppressed. We will
change the system.

Fairness is not a utopia.

The future I demand is simple: the ability to walk with the scales of justice balanced so the
presumption of innocence belongs to us all.

It would be remiss not to applaud the ambition of the author in presenting this story in this way. The concise way this piece is written made the reader leap straight into the action and want to keep reading to find out what happened next. This author has a firm grasp of one of the more tricky aspects of writing fiction; how the author can keep the reader interested, feeding tiny bits of information so that little by little the bigger picture unfolds. Kayo Chingonyi, Orwell Youth Prize Judge

‘What he left me with’ is a junior Orwell Youth Prize 2020 Runner Up, responding to the theme ‘The Future We Want’.

What was the inspiration behind your piece?

A draft of the piece was written before the reemergence of Black Lives Matter. However, after the deaths of George Floyd and Ahmaud Arbery, the protests inspired me and led me to rewrite some elements of my piece. The protests highlighted the harrowing effects of police brutality, it hurts more than the victims.  The perspective of a loved one was chosen because they are often perspectives we fail to acknowledge. Police brutality is seen as an American issue but I feel like my final statement is applicable to Britain. For example, prejudice and injustice are evident in the disproportionate use of stop-and-search, exemplifying that we are not all presumed to be innocent.

What tip would you give other young writers?

My biggest tip to young writers is very cliched but it is true: read anything and everything. Reading is quite possibly the biggest asset to your writing. It enables you to see different perspectives and grow your vocabulary. As a child, I read often which allowed me to develop a further enjoyment for English. Reading fiction, non-fiction, newspapers all contribute to a greater worldview which is ultimately necessary when writing. Do not be afraid to explore the limits of your imagination!

Given the global pandemic, has your idea about the future you want changed since you wrote the piece?

The pandemic has changed quite a few of my ideas surrounding the future. After seeing how it has had a greater impact on people who live in poorer areas, it has made me realise how we need to keep pushing for social mobility and equality. Additionally, the effect of pollution on coronavirus only exemplifies how people living in deprived, polluted areas suffer disproportionately. There needs to be a more sustainable way of living. We should have capitalised on the pandemic to implement a greener way of living for future generations. Lastly, the pandemic has led people to the realisation that racism is still a problem. I hope people remain conscious of racism so we can work to change the societal structures which allow racism to persist.