Not So Welcome Break 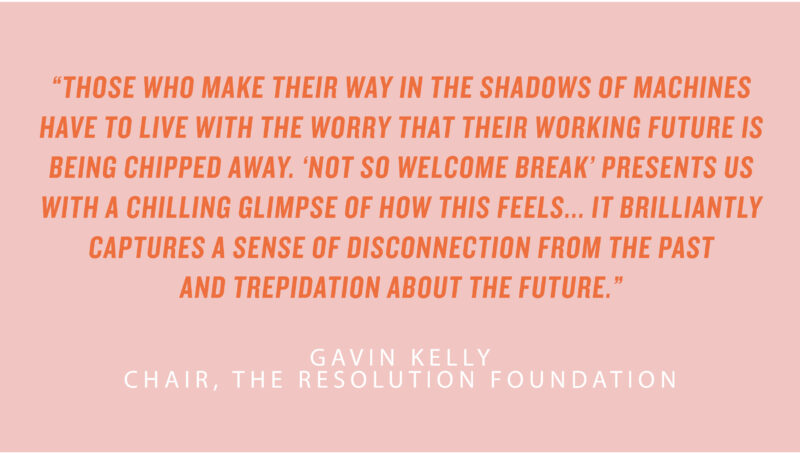 Rain covered the windscreen.  It was the type of rain that stuck to you and wouldn’t leave.  It blurred the neat pine trees lining the road and the towering turbines spinning so smugly above.  Their arms pointed every direction, a twisted confusion of metal dominating the dusk sky.  The patter of mizzle on glass was a hum under the constant tick-tock of wipers.  Other than the regular bashes into potholes, that was it.  John didn’t have the radio on – he didn’t like the music nowadays.  It had no character.

Passing a sign for a service station, John remembered when he started in this business – the first lorry he drove was much more satisfying than this.  Its diesel engine purred with true meaning and purpose.  But that was before the oil crash.  Now everything was electric.  The efficiency was so clinical, so lifeless John couldn’t stand it.  Well, he could stand it for a wage; that was the only reason he kept on.  Where else would he work?

On the other side of the road one of the new lorries blew past, its sheet of greyness interrupted only by sharp LED lights.  It was huge – at least twice the size of John’s.  That space was filled with a monstrous (digitally-controlled, of course) motor and thousands of pounds of cargo: but no cab.  There was no time, no money, no reason for a John to be driving that missile.

As its blood-red taillights disappeared, John pulled off to the services, but not before one more pothole could jolt him. He drove into one of many empty spots in the desert of a car park.  It was inhabited only by a lonesome few cockroach cars – the ancient, cheap type of vehicle people like John drove.  But on clambering out of his cab, John spotted another lorry parked nearby: a real one.  Leant against its side was its greying-haired driver, clad in warm overalls, smoking a cigarette in the cool rain.  John went over.

“London,” he smoked back. “Last journey for me.”

“Sacked,” he smiled wistfully.  Checking his watch, he sighed, “I better get going; the new ones will already be there.”

Nodding, John walked towards the building, wondering where you could even buy cigarettes nowadays.  The grubby sliding doors scraping across peeling laminate beckoned him in.  Inside the air was uncomfortably humid; a sweaty embrace as John came out of the wintry chill.  Flickering tube lights buzzed, the type of lighting you could describe as unflattering; except, John thought, there was nothing to flatter.  A rainbow of moulds curled up in every corner.  Some of the ceiling tiles were missing, revealing the building’s dirty arteries.

There were a few shops with faded signs: a struggling technology kiosk manned by a sunken-faced owner; a doughnut stall strewn in a dark corner; a clothing store with dishevelled shutters halfway down and a Marks and Spencer, half-stocked with uninspiring food.  He remembered going into Marks and Spencer as a boy, the shelf of mouth-watering sweets beaming in front of him.  He recalled it was once a fairly respectable shop – but like so many others, the company hadn’t quite survived the crash.

Opposite these tattered remnants sat a domineering fast-food restaurant consuming over half the service station’s space.  Its desolate, stainless-steel construction glinted insolently in its own modern lighting system.  There were no windows – who would want to look outside anyway?  The massive cavity had a complete lack of colour, except for two logos: one above the entrance; one above the collection lines, glowing mustard-gas yellow on a crimson line -the infamous arches.

Sighing, he ordered a black coffee and joined Collection Line 6.  After a minute, the wall opened and he took his drink from the lifeless machinery that manufactured it, an accidental “thanks” escaping his lips, the hangover of an old habit.  He knew it was better than any coffee he could make; computing had perfected this simple drink beyond any human’s abilities.  Yet John couldn’t help but feel the liquid was barren, the artificiality overwhelming any pleasant tastes.

Half-listening to recent unemployment statistics and something about devastating drone strikes in a far-off war, John overheard a couple of cagey men at the next table.

“No.  Spent it all.  None until next week.”  Glancing warily at a camera, he turned to John.  “You came in a lorry didn’t you?  Got anything good?”

John took a last sip and left his cup for the cleaning robot to collect.  He strode down a narrow corridor towards the men’s toilets.  The floor was noticeably grimy and had a few odd stains; they must only have one of the old cleaning machines, John thought.  The current models wouldn’t leave marks like that.

A wet mop sound came from behind John.  Expecting to see the cleaning robot sliding along, he was shocked to discover a man feebly wiping the floor.  His blue overalls hung listlessly and wisps of grey hair fell on to his face; a face that looked as though someone had stretched old, wet leather over a metal frame.  John could almost see the life wafting out of him with every raspy breath.  A plastic cup dangled from a frayed lanyard around his neck, jingling with coppers.  Although it was almost empty, John could tell it weighed him down.  The man’s sunken eyes pleaded for some money; he clearly wasn’t officially employed here.  Despite his commiserations, John couldn’t help.  It was years since he’d even seen physical money, never mind had any himself.

Out into the cold misty rain, the lorry driver he saw earlier was gone.  There was no cigarette butt where he had been.  John scaled his lorry’s steps and took a seat, the cab’s weak heating system leaving him shivering.  Outside it was getting darker every second and John knew he had to hurry up if he wanted to be on time.  The motor’s drone started once again and he drove away on to the black tarmac.

The dystopian story was so beautifully conceived. I particularly admired the careful use of setting and detail and found it both compelling and confident as a piece.” Kerry Hudson, Orwell Youth Prize Judge

Amid the abstract debate about what automation may mean for the ‘future of work’ it is all too easy to lose sight of what it may mean for the daily lives of workers. Those who make their way in the growing shadows of machines have to live with the enervating worry that their working future is being chipped away. ‘Not so welcome break’ presents us with a chilling glimpse of how this feels for one long haul driver. It brilliantly captures a sense of disconnection from the past and trepidation about the future. It heralds a new talent and deserves to be widely read.” Gavin Kelly, Chair of the Resolution Foundation

Tom Finlayson is a junior 2020 Orwell Youth Prize winner, responding to the theme ‘The Future We Want’.