Supporting the next generation of socially engaged young writers and thinkers from across the UK through our prize, resources, workshops and projects.
Enter youth prize
The Orwell Youth Prize
Home   /   The Orwell Youth Prize   /   Writing Prize   /   Young Poets Network – Poetry and Political Language Challenge 2020   /   Through the Lens of @realDonaldTrump: A Decade of Twitter Politics

Divya was a commended Foyle Young Poet in 2018. She is the third-prize winner in the Poetry and Political Language Challenge on Young Poets Network, in partnership with the Orwell Youth Prize. She is commended in the 2020 poetry translation challenge with Modern Poetry in Translation, judged by Clare Pollard; and in August Challenge #2: Fairy Tale Poetry. She was longlisted in the 2019 National Poetry Competition and in the 2020 Art to Poetry challenge. 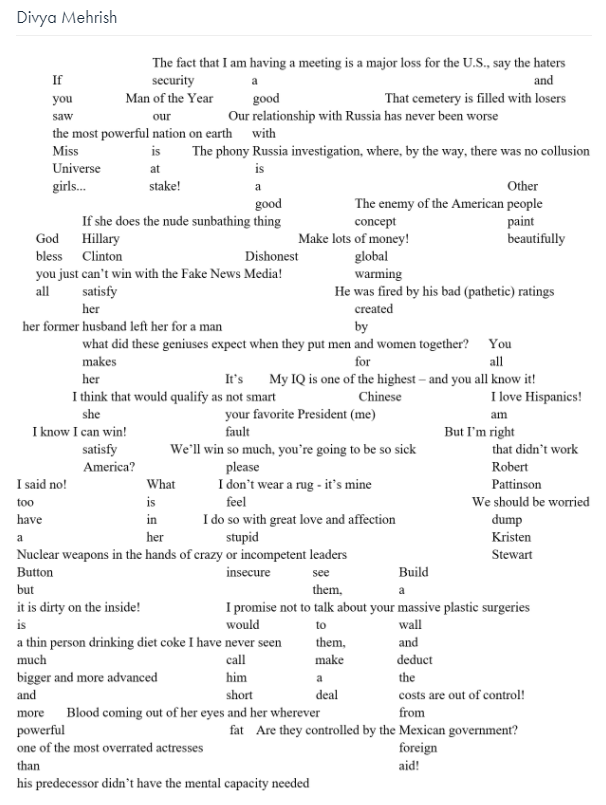 We asked Divya some questions about her poem, process and inspiration at the moment.

What was the inspiration for your poem?/How did you approach thinking about political language in a creative way?

Since 2016, when Donald Trump was elected President of the United States, I have become more and more aware of the manner in which political discourse has become increasingly less “political” in nature. As our country’s leader, Trump is, in a certain sense, the physical embodiment of politics. Yet his language is not only casual, coarse, and thoughtless, but is also often full of hate, bigotry, and prejudice. Additionally, Trump has claimed social media as the platform on which he addresses (and often criticizes) other politicians, public figures, and news outlets. I don’t think that Trump himself is aware of how powerful each word he spews on social media truly is. His tweets, at least since the beginning of his presidency, have been viewed as official political statements. People around the world take him and his word seriously. In my poem “Through the Lens of @realDonaldTrump: A Decade of Twitter Politics,” I approach the incredulity I feel towards Trump’s public use of language. In creating a visual poem consisting of intersecting fragments of Trump’s tweets, I have tried to highlight the often random and shocking nature of his declarations, which rarely relate to each other in any way except for the fact that they possess the ability to offend, appall, and unnerve.

What is your one tip to other young writers/poets

You need to be willing to take risks, to be honest, and to make yourself vulnerable.

Which writer/s/poet/s most inspire you and why?

I am currently quite inspired by poets who bring a unique perspective to their craft, forcing their readers to writhe in uncomfortable questions. Three poets I have been most recently intrigued by are Jericho Brown, Chris Abani, and Terrance Hayes. These poets write with purpose, with passion, and with power. Focusing on themes such as the history of racism, sexual identity, incarceration, and the human body, these poets write with tender and yet haunting detail. I believe that there exists some writing that is safe to classify as essential—to classify as necessary to the age-old literary tradition and to its evolution. The work of Jericho Brown, Chris Abani, and Terrance Hayes is essential. Their writing needs to be read. Why? Because the narratives and images that these writers paint with their words are marked by a level of urgency that has the power to transform both minds and societies. Their writing forces readers to self-reflect and challenge their own roles as audience members, as societal contributors, and on a more basic level, as members of our human race. The writing of Brown, Abani, and Hayes transcends the limits of artistic creation.

One book I read recently that truly made me stop and think was Ayn Rand’s Atlas Shrugged, a novel that is rich with philosophical explorations of the role of the human mind.