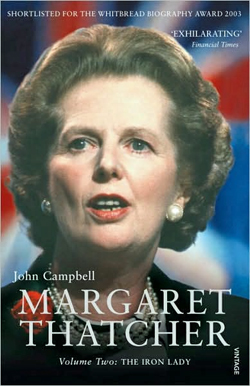 The first volume of John Campbell’s biography of Margaret Thatcher was described by Frank Johnson in the Daily Telegraph as ‘much the best book yet written about Lady Thatcher’. That volume, The Grocer’s Daughter, described Mrs Thatcher’s childhood and early career up until the 1979 General Election which carried her into Downing Street. This second volume covers the whole eleven and a half years of her momentous premiership. Thirteen years after her removal from power, this is the first comprehensive and fully researched study of the Thatcher Government from its hesitant beginning to its dramatic end. Campbell draws on the mass of memoirs and diaries of Mrs Thatcher’s colleagues, aides, advisers and rivals, as well as on original material from the Ronald Reagan archive, shedding fascinating new light on the Reagan-Thatcher ‘special relationship’, and on dozens of interviews. The Iron Lady will confirm John Campbell’s Margaret Thatcher as one of the greatest political biographies of recent times.