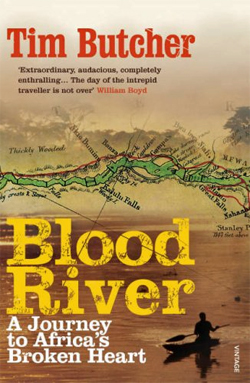 Ever since Stanley first charted its mighty river in the 1870s, the Congo has epitomised the dark and turbulent history of a failed continent – from colonial cruelty under the Belgians to the kleptocratic chaos of Mobutu Sese Seko and the current post-apocalyptic riot of robber-baron politicians. However, its troubles only served to increase the interest of Daily Telegraph correspondent Tim Butcher, who was sent to cover Africa in 2000. He remembered his mother’s stories of her own genteel river journey there in the 1950s and his connection deepened when he discovered that Stanley’s expedition was funded by the Telegraph. Before long he became obsessed with the idea of recreating Stanley’s original expedition – but travelling alone.

Despite warnings from old Africa hands that his plan was ‘suicidal’, Butcher spent years poring over colonial-era maps and wooing rebel leaders before making his will and venturing to the Congo’s eastern border with just a rucksack and a few thousand dollars hidden in his boots. He travelled for hundreds of kilometers on a motorbike, dogged by punctured tyres, broken bridges and dehydration. As he drove through the most dangerous areas, he stopped only to sleep – biking through the bush for hours and speeding up every time he passed a soldier. And then he reached the legendary Congo River, making his way down it in an assortment of vessels including a dugout canoe. Helped along the way by a cast of characters – from UN aid workers to a campaigning pygmy, he passed through the once thriving cities of this huge country, saw the marks left behind by years of abuse and misrule, and followed in the footsteps of the great Victorian adventurers, and of the visitors – such as Katherine Hepburn and Evelyn Waugh – who had been there in very different times. Almost 2,500 harrowing miles later, he reached the Atlantic Ocean a thinner and a wiser man.

His extraordinary account describes a country with more past than present, where giant steamboats lie rotting in the advancing forest and children hear stories from their grandfathers of days when cars once drove by. Butcher’s journey was a remarkable feat. But the story of the Congo, told expertly and vividly in this book, is more remarkable still.