As pupils return to school across the country, the Orwell Foundation and Picador have collaborated to give copies of Kate Clanchy’s Orwell Prize winning book Some Kids I Taught and What They Taught Me to seventy-five of the most important figures in educational policy in the UK, including the Prime Minister Boris Johnson MP, Education Secretary Gavin Williamson MP and First Minister of Scotland Nicola Sturgeon MSP.

The recipients will receive the book, a memoir about working as a teacher in the state education system, in the week that most schools reopen for the new year in a hugely uncertain environment. In order to think about schools and education for a year unlike any other, the Orwell Foundation and Kate Clanchy are asking those with influence to listen to teachers, students, and those who work with them. As the Foundation’s letter argues:

As a society, we need to hear what these young people have to say and should be concerned at the things they have no trust in and don’t say. Creative writing and thinking offers new insights that we should hear and respect.”

Kate Clanchy, who won The Orwell Prize for Political Writing for the book in July, has long argued that teachers should be listened to with greater attention and care, and commented on the initiative:

One of the contentions of my book is that teachers are not held in the same respect as other professionals. I think we can see that in this anxious return to school, and before that in the calamity of the A Level and GCSE results: both could have been so much ameliorated if the government had trusted and consulted teachers. In my book, I tried to show how very much teachers deserve that respect, and how important our schools are in our communities, through a series of personal stories. I very much hope that the 75 people receiving this book will enjoy those stories, but also take teachers more seriously.”

This year the challenges in education represent a crucial juncture not just for families and schools, but for the country. The risks to young people’s futures were encapsulated in the problems around A Levels and GCSE results last month, which were first predicted and then so eloquently discussed by 2019 Orwell Youth Prize winner Jessica Johnson.

Clanchy’s book is being sent out along with a letter from the Orwell Foundation, which is reproduced below. The full list of recipients is also available below. They represent a wide range of experiences and views from across the political spectrum, and include teachers, trade union leaders, researchers, authors and politicians.

Awarding The Orwell Prize for Political Writing in July this year (one of four Prizes for books and journalism awarded by the Orwell Foundation) the judges said Clanchy’s book showed a ‘brilliantly honest writer’ taking on ‘a subject that ties so many people up in knots — education and how it is inexorably dominated by class. Yet this book is the very opposite of a worthy lecture. Clanchy’s reflections on teaching and the stories of her students are moving, funny, full of love and offer sparkling insights into British society.’

Kate Clanchy is a writer, teacher and journalist. Her BBC 3 radio programme about her work with students was shortlisted for the Ted Hughes prize. In 2018 she was awarded an MBE for services to literature, and an anthology of her students’ work, England: Poems from a School, was published to great acclaim. In 2019 she published Some Kids I Taught and What They Taught Me, a book about her experience of teaching in state schools for several decades, which went on to win The Orwell Prize for Political Writing.

The letter below has been sent to all the recipients of Kate Clanchy’s book:

We are delighted to give you this year’s Orwell Prize winning book by Kate Clanchy, Some Kids I Taught and What They Taught Me.

It is witty and beautifully written, and you will enjoy it even if you disagree with aspects of it. It is a book about a lifetime in education, but also uncomfortably pertinent to the crisis young people face today. Stephanie Flanders, Chair of Judges for the Orwell Prize for Political Writing 2020, praised the ‘brilliantly honest’ way Clanchy tackles ‘a subject that ties so many people up in knots – education and how it is inexorably dominated by class’. We believe the book speaks to the value of creativity, thinking and writing in young people’s lives, and hope you will read it because of your care for, and influence in, education.

The Orwell Prize for Political Writing is awarded by the independent charity, The Orwell Foundation. Inspired by the work of the British author George Orwell, we encourage and promote the skills and values needed to think critically and write well about politics. Alongside the much sought-after Orwell Prizes for books and journalism, we run a growing programme of events, debates and lectures. And because young people are core to our charitable mission, we run The Orwell Youth Prize, an annual programme of workshops and activities for young people culminating in a writing prize. During lockdown, we were almost overwhelmed by a vast surge in entries by young people writing about ‘the future they wanted’, who were all offered feedback by an army of speedily recruited, expert volunteers.

The lessons we have learnt this year chime powerfully with Kate Clanchy’s central argument in this book about the value of teachers and youth workers and the encounters they have in nurturing extraordinary contributions from young people. We know young people entered the Youth Prize because their teachers and youth workers encouraged them to do so. We also knew it was important to hear the collective concerns of young people, alongside the voices of the winners. These conclusions were only underlined when, as this year’s A levels were announced, one of our previous winners found themselves making the news: Jessica Johnson had ‘fallen into her own story’ about an algorithm that banded pupils based on their backgrounds, after her own results were, initially, downgraded. We are proud that through her Prize-winning story, Jessica was able to play a part in clarifying that un-fairness and we are also sending you her story and this year’s winning entries.

As a society, we need to hear what these young people have to say and should be concerned at the things they have no trust in and don’t say. Creative writing and thinking offers new insights that we should hear and respect. So, we very much hope you will read this book, and we are grateful to Picador for collaborating with us on this campaign. We wondered, too, if we might begin a conversation with you about how best to enhance young people’s writing, how and by whom their voices are heard, and how best to support those who support them.

The Orwell Foundation and Picador are sending Some Kids I Taught and What They Taught Me to the following seventy-five influential people in education. They represent a wide range of experiences and views from across the political spectrum, and include teachers, trade union leaders, researchers, authors and politicians. 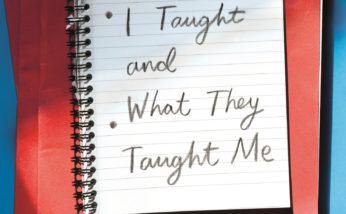