Supporting the next generation of socially engaged young writers and thinkers from across the UK through our prize, resources, workshops and projects.
Enter youth prize
The Orwell Youth Prize
Home   /   The Orwell Youth Prize   /   For teachers   /   Orwell in the Classroom   /   Decolonising The Curriculum: A Student Perspective 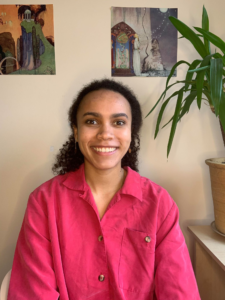 Anne Kimunguyi is a third-year history student at UCL, particularly interested in intellectual history (the history of ideas). Having initially been taken by this field in her first-year, Anne believes that it has pushed her to think critically about the construction of dominant narratives and concepts which have underpinned or continue to maintain contemporary social and political structures. Alex Talbott, Programme Manager of the Orwell Youth Prize, interviewed Anne to get her perspective on decolonising the curriculum.

AT: Why did you choose to study history? Why do you like history?

AK: For me, the most interesting thing about history is studying the way in which it is told. The idea that analyses of events, periods, ideas or individuals can be constructed in different ways is really intriguing to me, as is exploring the reasons or factors which lead to a specific interpretation. This first began to interest me in my final year of my A-Level when the various debates around the Arab-Israeli conflict highlighted the different ways in which this history is remembered. It was the first time that I was able to examine the way in which pre-existing dominant narratives are constructed and take hold.

At university level, I have enjoyed developing skills which help me become more critical of standard interpretations of history. The way in which arguments can be deconstructed, for me, highlights the importance of engaging with a range of arguments. I find it very intellectually stimulating to build my own line of argument around these contesting histories in each essay or assignment.

AT: How did you become involved in work around decolonising the curriculum at UCL?

AK: Towards the end of my first year, while I had begun to realise that engaging with multiple interpretations of history is what I enjoyed the most about studying the subject, I was also very aware of the privilege of being able to study such things at an elite university or even university level at all. I became very conscious of the lack of diversity in many courses at many universities, including my own. Whilst I was  enjoying  the courses that UCL had to offer, I noticed the continued dominance of western viewpoints in the curriculum, while many of my interests were expanding beyond this frame of analysis. Once I became aware that the Faculty of Social and Historical Sciences and Arts and Humanities were looking for students to help organise a conference around the theme of decolonising the curriculum, I was very eager to partake in this initiative. Here, my interest was driven further through engaging with the practical and intellectual issues that were raised by participants on the topic.

AT: Why does it matter?

AK: The importance of decolonising the curriculum revolves around notions of accessibility, representation and accuracy. Given the often prevalent absence of minority voices in both teaching and staff and student bodies, it is not surprising that academic curriculums, that are not yet decolonised, reflect this more heteronormative makeup of those able to access it – often those with a significant amount of social, economic and historical privilege. Crucially, when such a narrative omission takes place in universities or schools, which by virtue of their stature are seen to be an authority on the spreading of knowledge, narrow or exclusive narratives can have wider repercussions for the world beyond academia. Not only is misrepresentation an inaccurate depiction of the truth, misrepresentations being carried out into the world when students leave university can sustain pre-existing inequalities and inaccuracies which manifest in wider societal structures.

The importance of this decolonising process does not stand in isolation. Instead, it links to educational attainment gaps and a historical prioritisation of certain interpretations. This renders this process crucial to rectifying these issues. In striving to widen educational accessibility, it is important that an educational curriculum is as engaging and accommodating to the diversity that exists amongst students. Aligning this process with diverse stories that reflect the diverse student body, and wider society more generally, is an important way in which this can be done.

AT: Is this issue isolated to universities?

AK: All educational institutions have a responsibility to align their teaching with accuracy, justice, and critical analysis. However, this has the potential to become a balancing act when applied to institutions such as museums, which both serve to educate but also to evoke wonder and excitement from its visitors. Nevertheless, this balancing act does not erase the responsibility of ensuring a multi-faceted and fair narrative. As a result, we can see similar debates on decolonising such spaces, be it in museums, informative media productions, and schools, each tailored to their individual circumstances.

AT: Why is it difficult?

AK: Debates about what such a curriculum would look like have often led to disagreements and even backlash against the very idea of decolonising the curriculum. Anxieties over a total erasure of Western ideas often come into play here, despite assertions that such a process would merely entail contextualising and challenging them, rather than their complete emission. Some take issue with the term itself, suggesting its inability to truly engage with the historically colonial construction of knowledge and knowledge systems. Such thinkers, such as Rachael Minott capitalise ‘post-colonial’ or ‘liberated’ as better suited terms. Nonetheless, the general consensus amongst those wanting to change education systems maintains the necessity of separating privileged and exclusionary narratives.

AT: What should we be aiming for/what does the curriculum you want look like?

AK: A decolonised curriculum is a critical and all-encompassing one, which ensures the interrogation of dominant narratives and the broadening of academic scopes of inquiry. An example of when I believe this was put into my practise in my academic experience is when being taught a module on the Enlightenment – or as emphasized by my course leader – ‘Enlightenments’. As students, we have been encouraged to challenge the dominant Eurocentric narratives of many Enlightenment concepts as purely positive and progressive. Whole sections of the course have been dedicated to examining many of the racialist and gendered discourses espoused by some of the most prominent and applauded thinkers of the movement – Rousseau and Voltaire being prime examples. Much of the thought of these theorists contributed to upholding wider colonial and oppressive structures globally. As such, I believe it to be not only important, but also insightful  to have the opportunity to critically engage with the many facets of such historical thought, rather than blindly accepting the dominant, often romanticized narrative. In this way, the curriculum is more closely aligned with the just narrative, mitigating the problematic effects of a half-told history, and students receive a more enriching education of a higher standard. Crucially, the inclusion of a diverse body of contributors and analysts is the way in which this is achieved.

AT: Where can I go to find out more about this?