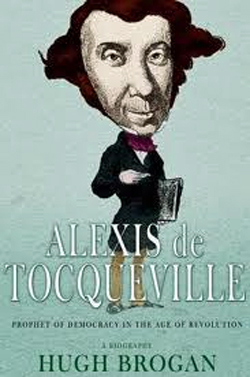 Alexis de Tocqueville: Prophet of Democracy in the Age of Revolution

It is now 200 years since the birth of Alexis de Tocqueville, French aristocrat, liberal politician and writer of genius whose great works, Democracy in America and the Ancien Regime, are ever more influential and discussed. As the son of a noble family which was nearly wiped out in the Revolution and as an ambitious politician during the July Monarchy and the Second Republic, he had a front seat at the revolutionary drama of his time. His writings are hugely valuable for the study of French, British and American society during his life (he visited the US in 1831 to gather material). It is Brogan’s long held ambition to write this biography. No one has yet attempted a biography of de Tocqueville in the English tradition and for that reason he is not fully present to the public imagination rather than an intellectual monument. This superb work will put that right. The judges said:

A touching vivid portrait of the thought and times and life of one of the most important thinkers about America, whose work is still some of the most powerful and still relevant. A book that really explores the thought in the context of the life – and a careful portrait of de Tocqueville’s important and difficult marriage – a stunner.