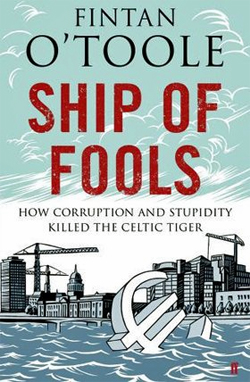 Ship of Fools: How Corruption and Stupidity Killed the Celtic Tiger

Between 1995 and 2007, the Republic of Ireland was the worldwide model of successful adaptation to economic globalisation. The success story was phenomenal: a doubling of the workforce; a massive growth in exports; a GDP that was substantially above the EU average. Ireland became the world’s largest exporter of software and manufactured the world’s supply of Viagra. The factors that made it possible for Ireland to become prosperous – progressive social change, solidarity, major State investment in education, and the critical role of the EU – were largely ignored as too sharply at odds with the dominant free market ideology. The Irish boom was shaped instead into a simplistic moral tale of the little country that discovered low taxes and small government and prospered as a result. There were two big problems. Ireland acquired a hyper-capitalist economy on the back of a corrupt, dysfunctional political system. And the business class saw the influx of wealth as an opportunity to make money out of property. Aided by corrupt planning and funded by poorly regulated banks, an unsustainable property-led boom gradually consumed the Celtic Tiger. This is, as Fintan O’Toole writes, ‘a good old-fashioned jeremiad about the bastards who got us into this mess’. It is an entertaining, passionate story of one of the most ignominious economic reversals in recent history.