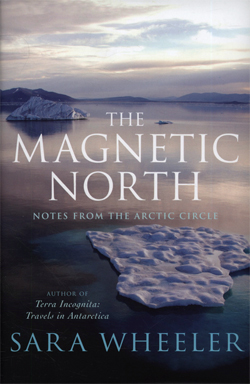 The Magnetic North: Notes From the Arctic Circle

Smashing through the Arctic Ocean with the crew of a Russian icebreaker, herding reindeer across the tundra with Lapps and shadowing the Trans-Alaskan pipeline with truckers, Sara Wheeler uncovers the beautiful, brutal reality of the Arctic. When she puts up her tent on the top of the Greenland ice sheet, she experiences climate change at the sharp (and cold) end. The Magnetic North is a spicy confection of history, science and reflection in which Wheeler meditates on the role of the Arctic in public and in private. The fragmented circumpolar lands were a repository of myth long before the scientists and oilmen showed up (not to mention desperado explorers who ate their own shoes), and the hinterland north of the tree line has fed literary imaginations from Dickens to Chekhov. The Magnetic North tells of all this, plus gulag ghosts, old and new Russia, colliding cultures and bioaccumulated toxins in polar bears. The unowned homogeneity of the Antarctic that enchanted the youthful author in the bestselling Terra Incognita finally finds a counterpart in the embattled polar lands at the other end of the earth. The complex and ambiguous Arctic, Wheeler writes, ‘perfectly captures the elegiac melancholy of middle age.’