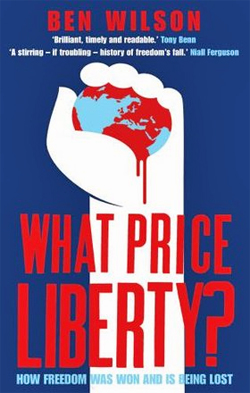 What Price Liberty? How Freedom Was Won and is Being Lost

Individual liberty will be the defining issue of the twenty-first century. With fear of terrorism, crime and social chaos putting our ideals of it into retreat in recent years, how do we, as individuals, negotiate the maximum amount of freedom in such a complex world? How can we resist the growth of intrusive authoritarianism without exposing ourselves to those risks? History provides a guide to answering these questions. In What Price Liberty? Ben Wilson travels through four centuries of British, American and European history, elaborating not just how civil liberties were constructed in the past, but how they were continually re-thought – and re-fought – in response to modernity. The last chapters put into context the controversies of the last decade or so – the threat of terrorism and the rise of the database nation. If liberty is to survive now it must, like it did in the past, adapt to new circumstances. But to do this we need to agree about the value we place on it. Ben Wilson is the author of The Laughter of Triumph: William Hone and the Fight for the Free Press, Decency and Disorder: The Age of Cant 1789-1837 and has been cited by the Irish Times as ‘one of the rising stars of historical writing’.