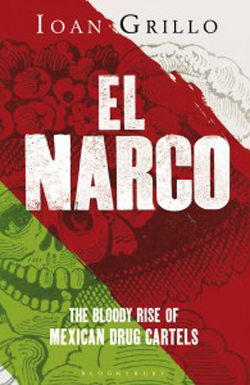 The world has watched, stunned, the bloodshed in Mexico. Forty thousand murdered since 2006; police chiefs shot within hours of taking office; mass graves comparable to those of civil wars; car bombs shattering storefronts; headless corpses heaped in town squares. And it is all because a few Americans are getting high. Or is it part of a worldwide shadow economy that threatens Mexico’s democracy? The United States throws Black Hawk helicopters, DEA assistance, and lots of money at the problem. But in secret, Washington is at a loss. Who are these mysterious figures who threaten Mexico’s democracy? What is El Narco?   El Narco is not a gang; it is a movement and an industry drawing in hundreds of thousands, from bullet-riddled barrios to marijuana-covered mountains. The conflict spawned by El Narco has given rise to paramilitary death squads battling from Guatemala to the Texas border (and sometimes beyond). In this “propulsive … high-octane” book (Publishers Weekly), Ioan Grillo draws the first definitive portrait of Mexico’s cartels and how they have radically transformed in the past decade. Taken from Bloomsbury