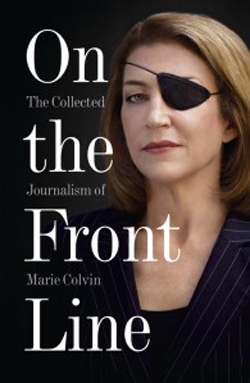 On the Front Line: The Collected Journalism of Marie Colvin

A fearless, passionate veteran reporter of conflicts from around the world, Sunday Times journalist Marie Colvin was killed in February 2012, covering the uprising in Syria from the besieged city of Homs. On the Front Line is a collection of her finest work, a portion of the proceeds from which will go to the Marie Colvin Memorial Fund. Marie Colvin held a profound belief in the pursuit of truth, and the courage and humanity of her work was deeply admired. On the Front Line includes her various interviews with Yasser Arafat and Colonel Gadaffi; reports from East Timor in 1999 where she shamed the UN into protecting its refugees; accounts of her terrifying escape from the Russian army in Chechnya; and reports from the strongholds of the Sri Lankan Tamil Tigers where she was hit by shrapnel, leaving her blind in one eye. Typically, however, her new eye-patch only reinforced Colvin’s sense of humour and selfless conviction. She returned quickly to the front line, reporting on 9/11, Afghanistan, Iraq, Gaza and, lately, the Arab Spring. Immediate and compelling, On the Front Line is a street-view of the historic events that have shaped the last 25 years, from an award-winning foreign correspondent and the outstanding journalist of her generation. Taken from HarperCollins