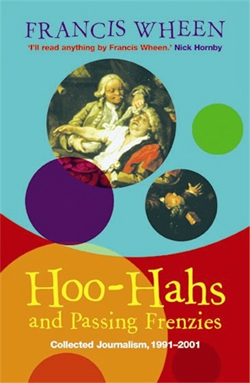 Francis Wheen has established himself as one of the most brilliant and admired journalists writing in Britain today with his massively acclaimed biography of Karl Marx, his contributions to radio and TV and his outstanding commentary and analysis.

This book brings together the best of his collected journalism from The Guardian, Observer and magazines such as Esquire and The Modern Review. Ranging from the follies of think-tanks to the future of swearing, the hypocrisy of New Labour to the madness of retired prime ministers, all via shady business deals and scabrous gossip, this is a book that none of Wheen’s legion of admirers will want to miss.