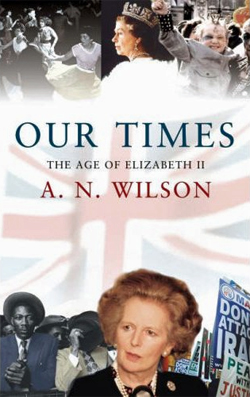 Our Times: The Age of Elizabeth II

When Queen Elizabeth II was crowned in 1953, many proclaimed the start of a new Elizabethan Age. Few had any inkling, however, of the stupendous changes that would take place over the next 50 years, in Britain and around the world. In Our Times, A.N. Wilson takes the reader on an exhilarating journey from that day to this. With his acute eye not just for the broad social and cultural sweep but also for the telling detail, he brilliantly distils half a century of unprecedented social and political change. Here are the defining events and characters of the modern age, from the Suez crisis to Vietnam, The Beatles to Princess Diana, the miners’ strike to the Cold War. Here are the Angry Young Men, the satirists of Beyond the Fringe, Ruth Ellis and the abolition of hanging, the rise of pop culture and celebrity, industrial unrest and the Winter of Discontent, the Thatcher era and the eventual collapse of the Soviet Union. This book will propel you from post-war austerity – an age of deference in which men wore hats and women wore gloves – through the alterations in our social landscape to the multi-cultural Britain of today. Despite the appalling tyrannies that have taken place in the world, Wilson argues that in the last fifty years Britain has known a period of prosperity and peace without precedent in its history. With Our Times, A.N. Wilson triumphantly concludes the acclaimed trilogy which includes The Victorians and After the Victorians. It makes compelling reading for anyone interested in the forces that have shaped our world.