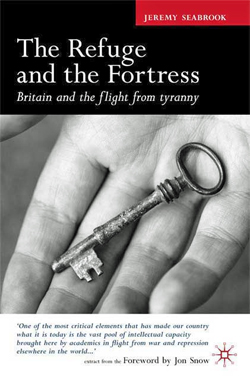 The Refuge and the Fortress: Britain and the Flight from Tyranny

The Refuge and the Fortress deals with British attitudes towards people fleeing racial, religious or political persecution in their own country. Current prejudice against asylum seekers is not new. It echoes much of the rhetoric that greeted Jewish refugees from Tsarist pogroms at the turn of the 20th century, and those escaping Hitler in the 1930s. But this only tells half the story. As well as rejection and hostility, there has always been a characteristically British generosity and kindness towards those who have suffered cruelty and injustice. The book tries to make sense of these conflicting responses. At times, it seems, Britain offers a tale of two countries – the xenophobic and the open-hearted. The aim of the book is to make sense of these apparent contradictions, through direct testimonies of refugees and their descendants over the past 75 years. In doing so, we can also gain an insight into the elusive quality of what it means to be British – a question which is now at the centre of much social and political debate.