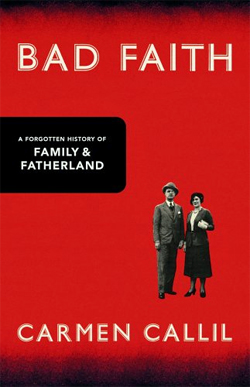 Bad Faith: A Forgotten History of Family and Fatherland

Bad Faith tells the story of one of history’s most despicable villains and conmen – Louis Darquier, Nazi collaborator and ‘Commissioner for Jewish Affairs’, who dissembled his way to power in the Vichy government’s and was responsible for sending thousands of children to the gas chambers. After the war he left France, never to be brought to justice. Early on in his career Louis married the alcoholic Myrtle Jones from Tasmania, equally practised in the arts of fantasy and deception, and together they had a child, Anne whom they abandoned in England. Her tragic story is woven through the narrative. In Carmen Callil’s masterful, elegaic and sometimes darkly comic account, Darquier’s rise during the years leading up to the Second World War mirrors the rise of French anti-Semitism. Epic, haunting, the product of extraordinary research, this is a study in powerlessness, hatred and the role of remembrance. The judges said:

A painful, painstaking account of terrible people, doing terrible things. But all the more stilling because they were small terrible people – with a both redemptive and a desperate aftermath in the daughter who was a good but damaged person. A very steady measured account, beautifully crafted.