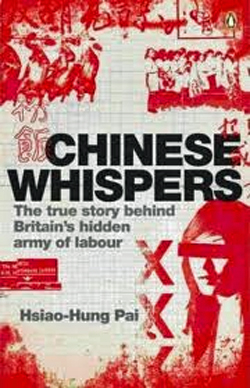 You know the people in this book. You’ll remember the harassed waitress from your local Chinese restaurant. You’ve noticed those builders across the street working funny hours and without helmets. You’ve eaten the lettuce they picked, or bought the microwave they assembled. The words ‘cockle-pickers’, ‘Morecambe Bay’, ‘Chinese illegals found dead in lorry’ will ring a bell. But did you know that there are hundreds of thousands of illegal Chinese immigrants in Britain? They’ve travelled here because of desperate poverty, and must keep their heads down and work themselves to the bone. Hsiao-Hung Pai, the only journalist who knows this community, went undercover to hear the stories of this hidden work force. She reveals a scary, shadowy world where human beings are exploited in ways unimaginable in our civilized twenty-first century. Chinese Whispers exposes the truth behind the lives of a hidden work force here in Britain. You owe it to yourself, and them, to read it.