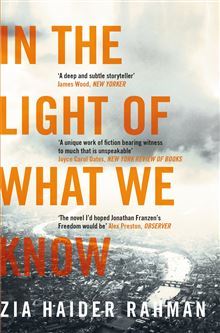 In the Light of What We Know

One September morning in 2008, an investment banker approaching forty, his career in collapse and his marriage unravelling, receives a surprise visitor at his West London home. He struggles to place the dishevelled figure carrying a backpack, until he recognizes a friend from his student days, a brilliant man who disappeared years earlier under mysterious circumstances. The friend has resurfaced to make a confession of unsettling power. Theirs is the age-old story of the bond between two men and the betrayal of one by the other. As the friends begin to talk, and as their room becomes a world, a journey begins that is by turns exhilarating, shocking, intimate and strange. Set against the breaking of nations and beneath the clouds of economic crisis, and moving between Kabul, New York, Oxford, London and Islamabad, In the Light of What We Know tells the story of people wrestling with unshakeable legacies of class and culture, and pushes at the great questions of love, origins, science, faith and war. In an extraordinary feat of imagination, Zia Haider Rahman has woven the seismic upheavals of our young century into a novel of rare compassion, scope, and courage. Taken from Pan Macmillan