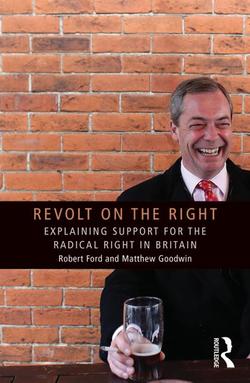 Revolt on the Right

The UK Independence Party (UKIP) is the most significant new party in British politics for a generation. In recent years UKIP and their charismatic leader Nigel Farage have captivated British politics, media and voters. Yet both the party and the roots of its support remain poorly understood. Where has this political revolt come from? Who is supporting them, and why? How are UKIP attempting to win over voters? And how far can their insurgency against the main parties go? Drawing on a wealth of new data – from surveys of UKIP voters to extensive interviews with party insiders – in this book prominent political scientists Robert Ford and Matthew Goodwin put UKIP’s revolt under the microscope and show how many conventional wisdoms about the party and the radical right are wrong. Along the way they provide unprecedented insight into this new revolt, and deliver some crucial messages for those with an interest in the state of British politics, the radical right in Europe and political behaviour more generally. Taken from Routledge