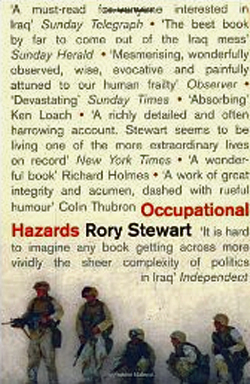 By September 2003, six months after the US-led invasion of Iraq, the anarchy had begun. Rory Stewart, a young Biritish diplomat, was appointed as the Coalition Provisional Authority’s deputy governor of a province of 850,000 people in the southern marshland region. There, he and his colleagues confronted gangsters, Iranian-linked politicians, tribal vendettas and a full Islamist insurgency. Rory Stewart’s inside account of the attempt to re-build a nation, the errors made, the misunderstandings and insumountable difficulties encountered, reveals an Iraq hidden from most foreign journalists and soldiers. Stewart is an award-winning writer, gifted with extraordinary insight into the comedy, occasional heroism and moral risks of foreign occupation. The judges said:

A buccaneering and brilliant evocation of life in Iraq. Not the usual bewailing something, far more revealing for an insider to attempt. A book from the heart of the war – not just an observer’s book but with a confident, witty, intellectual mastery. A tremendous read.