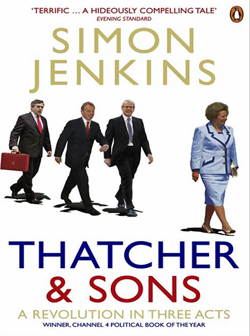 Thatcher and Sons: A Revolution in Three Acts

The history of Britain in the last thirty years, under both Conservative and Labour governments, has been dominated by one figure – Margaret Thatcher. Her election marked a decisive break with the past and her premiership transformed not just her country, but the nature of democratic leadership. Simon Jenkins analyses this revolution from its beginnings in the turmoil of the 1970s through the social and economic changes of the 1980s. Was Thatcherism a mere medicine for an ailing economy or a complete political philosophy? And did it eventually fall victim to the dogmatism and control which made it possible? This is the story of the events, personalities, defeats and victories which will be familiar to all those who lived through them, but seen through a new lens. It is also an argument about how Thatcher’s legacy has continued down to the present. Not just John Major, but Tony Blair and Gordon Brown are her heirs and acolytes. And as the Conservative party reinvents itself as a viable political force once again, is the age of Thatcher finally over? The judges said:

One of the most elegant, balanced, wise accounts of where our politics has arrived at and come from. Written with great brio and accomplishment but based on such a deep understanding of the forces in Conservative and Labour politics that have forged contemporary Britain – and the terrible errors the heredity has left us open to.