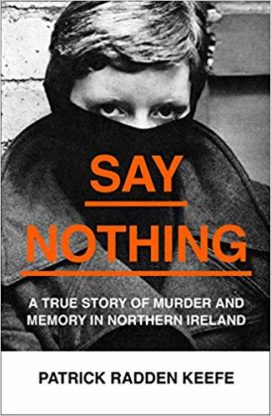 Say Nothing: A True Story Of Murder and Memory in Northern Ireland

Patrick Radden Keefe is a staff writer at the New Yorker magazine and the author of two critically acclaimed books, The Snakehead and Chatter. He received the National Magazine Award for Feature Writing in 2014, was a finalist for the National Magazine Award for Reporting in 2015 and 2016 and is the recipient of a Guggenheim Fellowship and an Eric and Wendy Schmidt Fellowship at the New America Foundation.

This haunting and timely portrait of The Troubles opens with the disappearance of a mother of ten and radiates outwards to encompass the entire conflict, giving voice to characters and stories often shrouded in silence, and leaving an indelible and nuanced impression of the human cost of this unstable chapter of history.”