‘What I have most wanted to do… is to make political writing into an art’
Enter the prize
The Orwell Foundation
Home   /   Orwell   /   Articles   /   Peter Davison: Bibliographical note on Orwell’s Morocco Diaries

Orwell began this diary on the way to Morocco. The diary is typewritten, almost certainly from a handwritten original; the handwritten version for 12 to 28 March 1939 is extant and annotated, in Orwell’s hand, ‘To be typed into the diary when machine is available.’… Orwell annotated his typescript in the margins and wrote longer notes, often illustrated, on blank facing pages. 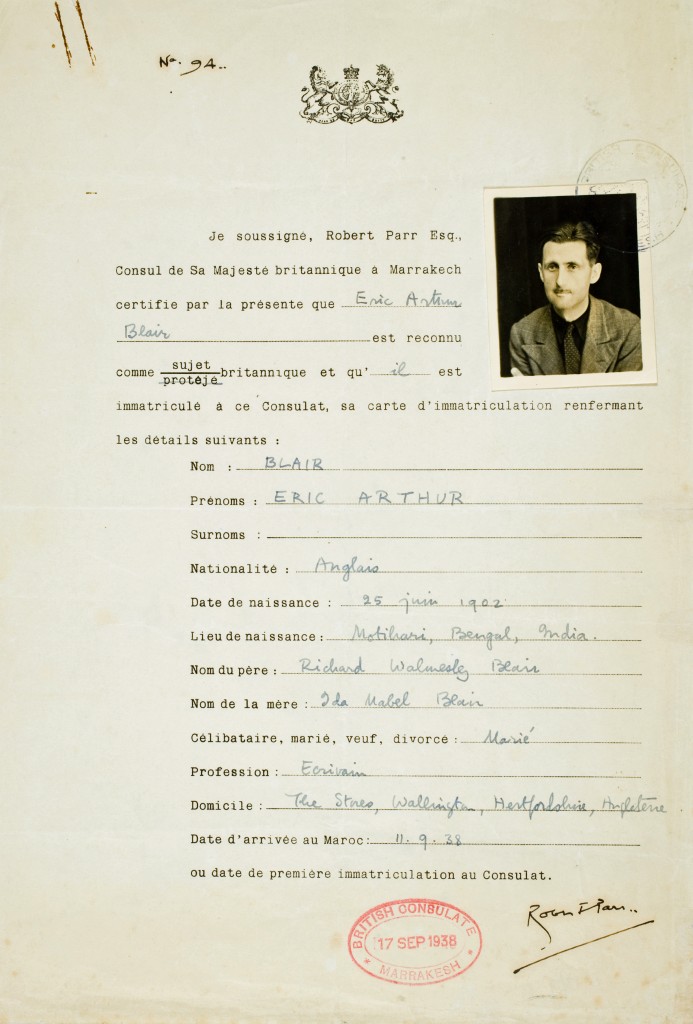 They were to stay for a little over six months, sailing from Casablanca for England on March 26 1939. On 18 September, signing as Eric Blair, Orwell accepted the lease of ‘une villa et une piece de domestique, route de casa [Casablanca], apartenant a Monsieur Simont, Boucher a Marrakech’ for a minimum period of six months at 550 francs per month, running from 15 October 1938. The villa was about five kilometers from Marrakech. R. L. Bidwell records that French franc as being at 165 to the pound (31 to the dollar) in March 1938, and by January 1939 the rate had become 176.5 to the pound (39.8 to the dollar), a rate maintained at the following January (Currency Conversion Tables, 1970, 20), Thus, 550 francs was about £3.25 ($15.50) during these six months. The rent of the cottage at Wallington was 7s 6d per week or £1.50 in today’s coinage if not value for four weeks. The Moroccan lease was negotiated by Désiré Bézert of Marrakech-Guéliz.

Peter Davison edited The Complete Works of George Orwell, working on the 20 volumes for 17 years. He is Professor and Senior Research Fellow in English and Media, De Montfort University, Leicester. He has written and edited fourteen books and has also edited the Facsimile of the Manuscript of Nineteen Eighty-Four and written George Orwell: A Literary Life. From 1992 to 1994 he was President of the Bibliographical Society, whose journal he edited for twelve years.