Streets in the Sky 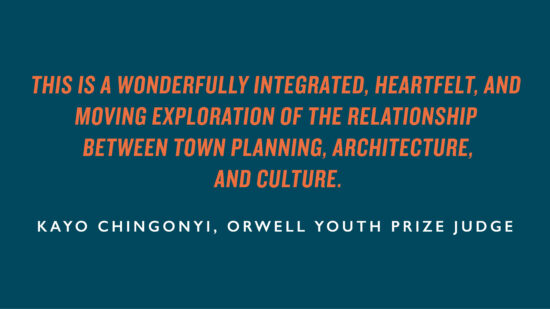 If you could knock the world down and begin again what would you build? Bright lights, creature comforts, a place with dignity, elegance and, most importantly, community. Streets that run through the sky. These words and more were used in 1969 to describe the newly built Hulme Crescents, a collection of four concrete high-rise flats, created to house 300,000 of the people displaced by the demolition of the slums in Manchester. They were advertised as the future, and to those families who made them their home, the Crescents seemed to be a utopia.

From as early as 1934, Hulme’s terraced houses, the homes of the working class of Manchester for many generations, had been designated for demolition. In 1914 a special committee of the city council recorded that the houses were drastically overpopulated, and roughly 90% of houses had no baths or laundry facilities. By the 1960s, families living in this area felt the luxury and technological advancements of the age had passed them by; many did not even have indoor plumbing. The consensus was that the houses must go, and the locals must be moved into safer, healthier accommodation. Out of the destruction of the old world, a new one would be built.

There was a strong atmosphere of hope among the new residents as they moved into the Hulme Crescents. The architects promised them community living, identical to the old terraces. They even included wide walkways on all levels which meant access between neighbours and allowed the milk float to do its rounds.

However, the utopian dreams of a world with ‘streets in the sky’ soon crumbled. The local authority had been driven by the ambition to build big, fast, and cheaply, and as a result the buildings deteriorated rapidly. They were poorly insulated and ventilated, vermin spread relentlessly, and reinforcing bolts and ties appeared to be missing. The fault also lies with the building companies, who failed the standards for quality control which they themselves set, and sold products unfit for purpose. Some design flaws should have been foreseeable. The tightly packed streets which had previously connected neighbours to each other, and to the city centre, were replaced by large, desolate swathes of open space in front of each building. Two roads, the Mancunian Way and Princess Parkway, enclosed the Crescents from either side, making it a lonely island for its residents. Almost nothing was left of the tight knit, extrovert communities who had once populated Hulme.

The people who inhabited the Hulme Crescents soon came to regret their move. They had been given no choice over the slum demolition, and whilst many been perfectly happy to escape their previous circumstances, most felt their quality of life was now worse. The people behind this plan had arguably admirable intentions, they hoped to improve the living standards of Manchester’s poor. Yet they failed to consult the poor themselves, and allowed themselves to be distracted by personal ambition, cheap costs and cutting corners. What the council, architects, government and planning co-ordinators had all failed to recognise was how delicate people’s lives and communities can be. They believed it would be simple to wrench them apart and sew them back together, but people are not numbers on a report, or problems to fix. All the building projects in the world cannot help a community if those in power do not communicate with the people.

This story is not unique to Hulme. The 1960s and 70s have become famous for the Government’s mass destruction of old slums, and the huge scale at which public housing was built; public housing which was often poorly considered, poorly made and possibly even demolished at the turn of the millennium. In Liverpool, my own great-grandmother was removed from her childhood home in her old age and placed in a flat, miles from her friends and community. The house, despite being in an easily fixable condition, was destroyed. In Glasgow, the tenement housing in the Gorbals was, despite its squalor, home to a tight-knit community who provided ready-made support nets for each generation. The high-rise flats built to replace them left families isolated outside of Glasgow city centre and were eventually demolished. What stands out to me in every story from this decade, is the optimism and hope which accompanied the building of each high rise, and the suffering caused when it all went wrong.

My own school is no more than a minute’s walk away from the site of the Hulme Crescents. They were demolished in 1992 and have now been replaced by huge groupings of council houses. They have gardens, two floors, plumbing and central heating: idyllic in comparison to their predecessors. Hulme’s current council estates are not perfect. Many residents struggle with poverty, some with addiction or crime, and the houses themselves are neither spacious nor especially picturesque. However, they have revived something vital- a sense of community. A second wave of regeneration in 1992 and 1997 meant around £59m in funding, which the council used to improve both housing and social spaces. Crime dropped in the area, and an emphasis was placed on community pride. This public housing initiative has achieved precisely what the council set out to do in the 1960s.

In 1969 the world turned upside down for the residents of the Hulme slums. In 2020, the Coronavirus pandemic has changed my life, and the life of almost everyone else in the country, in a way which is nearly as drastic. At the time of writing, most countries are in lockdown, and the future has suddenly shown itself to be entirely unpredictable. There is much to be learnt, from both the lockdown and the crescents, but my following two points are the most important.

First, moving forward we should actively embrace the hope and idealism which Hulme’s communities felt as they moved into their new homes. For my conscious lifetime I have heard new ideas shot down because they are just too far from the way things have always been done. This pandemic has taught us that society, everything we have carefully constructed, can cease to exist overnight. Every day people suffer in this country, and in a vast number of cases a small change in society or law would alleviate that in an instant. We are now aware that our society is our construct, let us never pretend that it is not in our power to make it a fairer construct.

Since beginning of lockdown, we have all been asking the same question. What will life be like when we finally re-emerge? Will we be removed and anti-social, or will our shared experiences lead to deeper and stronger community bonds? I believe that our society can be re-oriented towards community, and a good place to start is with a shift towards both part-time work and working from home. Not only will this reduce pollution and congestion in cities, it might also bring families closer together, and closer to their neighbours, reaffirming the importance of the home and the community as supportive safety nets for children. Furthermore, given our unprecedented collective experience of isolation, programmes to unite communities and tackle loneliness might be received more warmly and enthusiastically than before.

However, my second point is a warning. The Crescents show us that a utopia can descend very rapidly into a dystopia if we lose focus. After the demolition of the slums, gang warfare began to plague Hulme. Many believe the lack of a community safety net left these young people, who were still living in poverty, feeling enormously angry and lost. Gangs became their communities. Hulme recovered, but after the financial crash of 2007-08, the Conservatives were elected to government and pursued a relentless policy of austerity, which decimated the welfare state and has led to the closures of thousands of youth and community centres. Given that the Conservatives are still in government, and another financial crisis has been predicted post-lockdown, as a country we must be vigilant. We can not allow the knife to be dug deeper into the welfare state, into our communities, for the sake of an ideology which idealises the individual yet allows the masses to starve.

However, these challenges must not dishearten us. The story of Hulme is now one of success. If the city planners had co-operated with the residents themselves, the story might have been different. But in the end, it was not the government or architects who healed Hulme, it was the people themselves. By reviving its community, Hulme overcame hardship. It is easy to give up, because the world feels too broken to be fixed by you, one person. But if we choose to believe this then we are buying into a narrative which says that we are alone, community is worthless, everyone must fight for and enrich themselves. Working together we are not alone. Vigilance, communication, co-operation and community are needed to win our battles. And that is what gives me more hope than anything.

This is a wonderfully integrated, heartfelt, and moving exploration of the relationship between town planning, architecture, and culture. The author is engaged in the important project of opening a vista onto a world that is so often misrepresented  by those standing outside it and rarely allowed to express itself on its own terms. There is the makings here of a long life as a writer should the author choose it.” Kayo Chingonyi, Orwell Youth Prize Judge

‘Streets in the sky’ does what all good writing should: it gives us pause for thought as well as hope. As we squint at coming months and years through a glass darkly, it reminds us that however inevitable the perpetuation of the past, of the status quo, of the age of austerity  seems, none of this is immutable fact. Our individual agency may seem limited, but we must remember to look back and learn, to speculate about the change that is possible. The things that have gone before and what we see around us is the product of human imagination, so it can be imagined differently. This piece reminds us that the future must be imagined. It must be imagined collectively, with care, hope and determination.” Matthew Leung, ‘Assemble’ (a Turner Prize-winning multi-disciplinary collective)

Rosaleen Tite Ahern is a senior 2020 Orwell Youth Prize winner, responding to the theme ‘The Future We Want’.