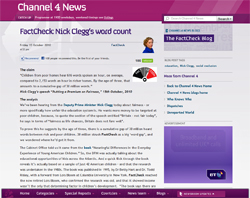 Channel 4 FactCheck goes behind the spin to dig out the truth and separate political fact from fiction. Cathy Newman joined Channel 4 News in January 2006. Since arriving at the programme, her scoops have included the arrest of David Cameron’s aide Steve Hilton and the disclosure that illegal immigrants worked at the Home Office. Cathy also runs the FactCheck blog, which sorts the facts from the spin and unpicks politicians’ claims and counter-claims. It has been cited in parliament, imitated by rivals, and loyally followed on Twitter. Before Channel 4 News, Cathy worked for the Financial Times and The Independent.