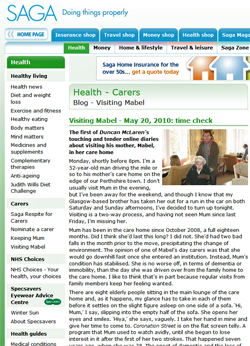 Duncan McLaren’s touching and tender online diaries about visiting his mother, Mabel, in her care home. In 2003, Duncan McLaren’s mother had a stroke and he moved from London in order to live with his parents in Perthshire. For a few years, while helping in the family home, he was able to carry on writing about the individuals whose creativity fascinated him. Looking For Enid: The Mysterious and Inventive Life of Enid Blyton was awarded Saga Magazine’s Grown-Up Award for Non-Fiction in 2007. However, further deterioration in his mum’s health caused by strokes and falls resulted in her moving to a care home and since then Duncan’s writing has focused on Mabel.