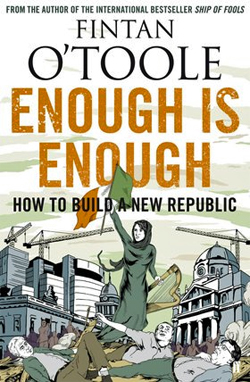 Enough is Enough: How to Build a New Republic

The Republic of Ireland, which declared itself in 1949, allowed the Catholic Church to dominate its civil society and education system. Investment by American and European companies, and a welcoming tax regime, created the ‘Celtic Tiger’ of the 1990s. That brief burst of good fortune was destroyed by a corrupt political class which encouraged a wild property boom, leaving the country almost bankrupt. What Ireland needs now is a programme of real change. It needs to become a fully modern republic in fact as well as name. This disastrous economic collapse also allows us to think through the kind of multiculturalism that Ireland needs, and to build institutions that can accommodate the sudden influx of migrants who have come to Ireland in the past 15 years. The State should take over the entire education system, for which it pays already, and make it fit for the 21st century. The political system is dysfunctional and is one of the main causes of the debacle we have just experienced. Ireland needs constitutional reform. Politicians have been let get away with murder, and there is a fatalistic sense that nothing can change. The country needs to encourage participation in, and oversight and knowledge of politics, to make people feel that they have a right to challenge the old party machines and to make a difference. It is their country, after all.