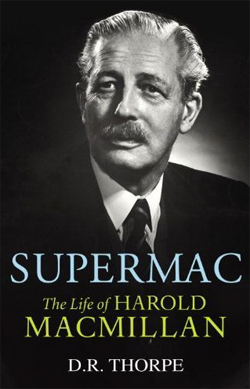 Supermac: The Life of Harold Macmillan

Great-grandson of a crofter and son-in-law of a Duke, Harold Macmillan (1894–1986) was both complex as a person and influential as a politician. Marked by terrible experiences in the trenches in the First World War and by his work as an MP during the Depression, he was a Tory rebel – an outspoken backbencher, opposing the economic policies of the 1930s and the appeasement policies of his own government. Churchill gave him responsibility during the Second World War with executive command as ‘Viceroy of the Mediterrranean’. After the War, in opposition, Macmillan overhauled the Conservatives on progressive and radical lines; after 1951, in government, he served as Minister of Housing, Defence Secretary, Foreign Secretary and Chancellor of the Exchequer. He became Prime Minister after the Suez Crisis, and between 1957 and 1963 presided over Great Britain’s transition from the age of austerity to that of affluence. He also proved himself one of the great publishers of his generation. The culmination of 35 years of research by one of our most respected historians, Supermac gives an unforgettable portrait of a turbulent age. It is a magisterial biography destined to become a classic.