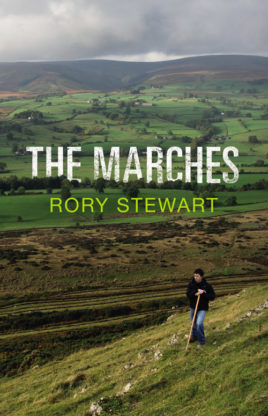 His father Brian taught Rory Stewart how to walk, and walked with him on journeys from Iran to Malaysia. Now they have chosen to do their final walk together along ‘the Marches’ – the frontier that divides their two countries, Scotland and England. Brian, a ninety-year-old former colonial official and intelligence officer, arrives in Newcastle from Scotland dressed in tartan and carrying a draft of his new book You Know More Chinese Than You Think. Rory comes from his home in the Lake District, carrying a Punjabi fighting stick which he used when walking across Afghanistan.

On their six-hundred-mile, thirty-day journey – with Rory on foot, and his father ‘ambushing’ him by car – the pair relive Scottish dances, reflect on Burmese honey-bears, and on the loss of human presence in the British landscape. On mountain ridges and in housing estates they uncover a forgotten country crushed between England and Scotland: the Middleland. They cross upland valleys which once held forgotten peoples and languages – still preserved in sixth-century lullabies and sixteenth-century ballads. The surreal tragedy of Hadrian’s Wall forces them to re-evaluate their own experiences in the Iraq and Vietnam wars. The wild places of the uplands reveal abandoned monasteries, border castles, secret military test sites and newly created wetlands. They discover unsettling modern lives, lodged in an ancient land. Their odyssey develops into a history of nationhood, an anatomy of the landscape, a chronicle of contemporary Britain and an exuberant encounter between a father and a son.