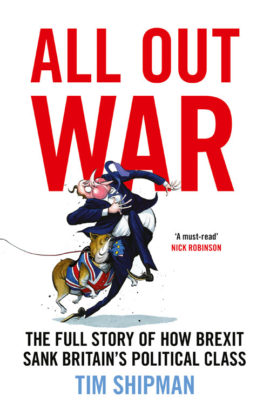 Based on unrivalled access to all the key politicians and their advisors, including Boris Johnson, Michael Gove, George Osborne, Nigel Farage and Dominic Cummings, the mastermind of Vote Leave, Tim Shipman has written a political history that reads like a thriller, and offers a gripping, day-by-day account of what really happened behind-the-scenes in Downing Street, both Leave campaigns, the Labour Party, UKIP and Britain Stronger in Europe.

Shipman gives his readers a ringside seat on how decisions were made, mistakes justified and betrayals perpetrated. Filled with stories, anecdotes and juicy leaks the book does not seek to address the rights and wrongs of Brexit but to explore how and why David Cameron chose to take the biggest political gamble of his life and explain why he lost.