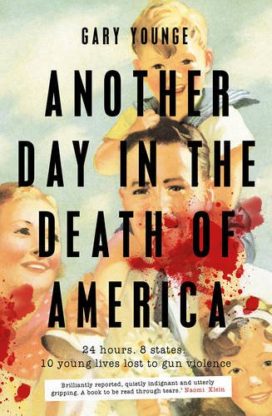 Another Day in the Death of America

Saturday, November 23rd, 2013. It was just another day in America; an unremarkable Saturday on which ten children and teens were killed by gunfire. The youngest was nine; the oldest was nineteen. White, Black and Latino, they fell in suburbs, hamlets and ghettos. None made the national news. There was no outrage about their passing. It was just another day in the death of America, where on a daily average – seven children and teens are killed by guns.

Younge picked this day at random, searched for their families and tells their stories. The nine-year-old opened the door and was shot in the head by his mother’s ex-boyfriend. The eleven-year-old was killed by his friend at a sleep over in rural Michigan. The eighteen-year-old gang member, on Chicago’s South Side, was shot in a stairwell just days after being released from prison. Through ten moving chapters – one for each child – Younge explores the way these children lived and lost their short lives. He finds out who they were, who they wanted to be, the environments they inhabited, and what this might tell us about society at large.

What emerges is a searing portrait of childhood and youth in contemporary America.