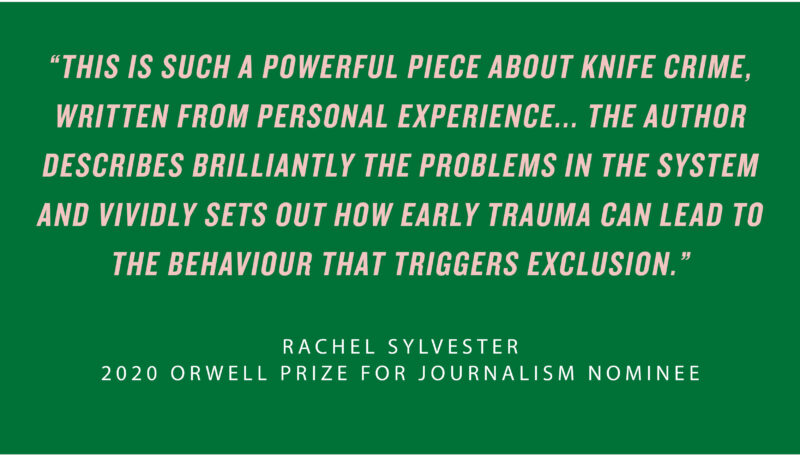 I live Walthamstow, an area that has often been associated with violent crime, and was once even described as ‘WARTHAMSTOW’ in an article in The Sun. But while it’s easy for people on Twitter to call the perpetrators (or sometimes even the victims) of these crimes ‘animals’, encouraging ‘lethal injection’ as punishment, it’s different when you go to school with them. I know people who have been stabbed. I know people who have lost loved ones to knife crime. I also know people who carry knives. They are not animals. They are not monsters. They are children. Children should not be killing other children. So why does it happen?

As my friend Hani* put it, “No one cares.” Hani’s half-brother Ali has been described as a ‘knife-wielding thug’ in an article reporting the offence that landed him 13 years in prison. What the article fails to mention is Ali’s absent father, schizophrenic mother, and the fact that he was excluded from school in Year 9, and never returned.

“I don’t know what you get from excluding a 14 year old; in school you’re safe, you’re not safe on road.” Hani said, expressing a disappointment in the system she believes failed her brother. It appears that as soon as the school was rid of Ali, they lost all interest, and offered him no further support. At 14 years old, Ali was barely a teenager, and yet was left to fend for himself in a world that did not work for him.

In 2017-2018, 7,900 children were permanently excluded in England, this number being the highest we’ve seen in a decade. Of these children, 78% have been identified as those that fall under the Special Educational Needs, Free School Meals or ‘in need’ categories, showing that school exclusion policies often target the children most in need of the school’s support. The ‘schools-to-prison pipeline’ describes the disproportionate tendency for young people from disadvantaged backgrounds to become incarcerated, and the evidence supporting it is overwhelming. Of 15-17 year olds in Young Offender Institutions, 86% of young men and 74% of young women have been excluded at some point during their education. Half of them have literacy levels of 7-11 year olds, despite being much older, a sign of how much education they have missed.

Ali’s history of exclusion began in primary school, when he first began behaving disruptively, but Hani believes the story started well before this. She described how their father was never there for Ali, and how, having always lacked a positive male role model, he ended up making friends with “the wrong boys”. She went on to tell stories about how, from the age of 7, Ali would find himself being woken up in the middle of the night by a frantic mother, who did not recognise him, before being thrown out onto the street. As children, we often turn to our parents when we are in trouble, or need guidance. For children like Ali, raised by a single parent with severe mental health issues, this isn’t always possible. With no alternative support system, it would have been easy for him to feel alienated and ignored.

As Hani unravelled Ali’s story, he began to appear less like a ‘knife-wielding thug’ and more like a deeply traumatised teenage boy who did something terrible. What we experience as children shapes us for the rest of our lives, and research suggests up to 90% of young offenders have experienced maltreatment or loss. Here, a disturbing pattern begins to show, and it is impossible not to wonder: if there had been some form of intervention earlier on, how many of these crimes could have been prevented?

At 16, Ali ended up in a Young Offender Institute for his involvement in a stabbing. Richard Garside from the Centre of Crime and Justice Studies described YOIs as “grim and gruesome institutions”. He described visiting one and seeing blood in the showers and solitary confinement cells that were entirely bare, apart from a blanket on the floor. He also explained how the Ministry of Justice permits officers to use techniques described as child abuse by the Independent Inquiry into Institutional Child Sexual Abuse. A Chief Inspector’s report in 2017 concluded that ‘There was not a single establishment that we inspected in England and Wales in which it was safe to hold children and young people.’ How can we justify continuing to keep children in these conditions?

Two years after being held in a YOI, Ali offended again and ended up in an adult prison, where he remains to this day.

At no point in Ali’s life was there any intervention from any support groups, despite all the trauma the family had experienced. Where were Social Services? The Local Authority? The Child and Adolescent Mental Health Services? It seems that as soon as a child leaves the school system, it is very easy for them to become forgotten about, even if they belong to categories that need the most support. Research has highlighted time and time again that early intervention can help prevent violence in the future, and yet educational, domestic violence and mental health services have all had their budgets cut in recent years. Stories like Ali’s can’t just be headlines in newspapers, they need to be lessons for us. The main aim of the youth justice system is to prevent the offending of children and young people. The youth justice system isn’t working. Incidents of violent crime have been on the rise since 2013, with 2019 seeing a 19% increase on the previous year. We need change. And change is possible.

Areas in Scotland have faced similar struggles with youth violence and gang crime. Yet, between 2004 and 2019, the country saw a dramatic decline in violent crime. In 2003, Scottish police recorded 15,230 cases of non-sexual violent crime. In 2018-2019, there were only 8,008 cases. But what brought about this change? In 2004, Scotland introduced a Violence Reduction Unit that took on a public health approach to violence. Violence was no longer a police issue, tackled with high visibility policing or more officers. It became a community issue, tackled with empathy, health visitors, and early years provision.

One of the many success stories of the VRU comes from the Easterhouse area of Glasgow. In 2007, a Community Initiative to Reduce Violence was established. They introduced a case management team involving people from education, social work, police, community safety and housing services. This team had a 24 hour hotline that dealt with calls from gang members, and provided them with the right support. Referral sessions were held, in which gang members heard from different voices in the community, such as police officers, doctors, mothers of victims, youth workers, and previous offenders. People with seemingly little in common came together under one goal: ending violence in their community. In the first two years of the CIRV, violent offending had decreased by 46% and gang fighting by 73%. School exclusions dropped by 85%. But the benefits of the CIRV extended well beyond the gang members themselves. The number of tenants satisfied with the area as a place to live rose by 21%, and those not feeling safe at night fell by 22%. This is just one of many case studies that give evidence of the VRU’s success.

It’s too late for Ali now. But it’s not too late for the many children who are currently in similar situations. Youth violence is tearing apart families all over the country, but stories from Scotland have shown us that the motto of the VRU is true – ‘violence is preventable, not inevitable’. We can do better. We must do better. Every time a life is taken in this way, two families lose a child. We owe it to them to build a future that ensures stories like Ali’s are never heard again.

*Some names have been changed to protect the identities of the people featured in the article.

This is a well-balanced piece written with emotion, structure, and backed by research which includes speaking to those directly affected by the themes under discussion. While there are some oversimplifications in places (e.g the link made between trauma and offending) there is an overall the sense of someone writing with an affinity for what they write about which lends the piece a moral authority that, coupled with the technical assurance evidenced across the piece as a whole, made ‘Knifepoint’ stand out.” Kayo Chingonyi, Orwell Youth Prize Judge

This is such a powerful piece about knife crime, written from personal experience by a sixth former in Walthamstow who knows people who have been stabbed and goes to school with victims and perpetrators. The author describes brilliantly the problems in the system and vividly sets out how early trauma can lead to the behaviour that triggers exclusion. As the article says, these are not “monsters” they are children And “children should not be killing other children”. It offers an articulate response as well as an explanation.” Rachel Sylvester, Times Journalist and 2020 Orwell Prize nominee

“In 1984 Orwell wrote ‘They can’t get inside you if you can feel that staying human is worthwhile, even when it can’t have any result whatever, you’ve beaten them’. This essay embodies that spirit; it holds a mirror to our community and speaks fearlessly and clearly about how pathways for young people like Ali become cut off, as society fails to value their future and our shared responsibility in that process. To write with such passion about knife crime and its impact is to be a voice that makes a difference; someone who isn’t beaten by injustice but is using their platform to call for us all to address it. In doing so, this essay embodies the relationship Orwell described so powerfully between independence of mind and changing the world.” Stella Creasy, MP for Walthamstow

Jessica Tunks is a senior 2020 Orwell Youth Prize winner, responding to the theme ‘The Future We Want’.

What was the inspiration for your piece?
The main inspiration for my piece came from an article in the Guardian that was part of the ‘Beyond the Blade’ series, called ‘The boy who killed – and the mother who tried to stop him’. I found the article really moving and it made me reflect on a lot of my own experiences of the area I grew up in, as well as those of my friends, making it quite persona to me. This inspired me to look deeper into the causes of violent crime amongst young people and think about what could possibly be done to prevent it.

Why did you choose the medium of your chosen form to communicate your idea about the future?
I wrote in an essay/article style because I had done a lot of research, and wanted to include it in my piece. Although I told a personal story, I used statistics about the issue as a whole in order to put the story into context, as well as showing how serious and widespread the problems actually were. At the same time, I tried to humanise the offenders I was writing about, to avoid people solely seeing them as a statistic. I wanted to show that every offender has a story much like the one I was telling myself.

Given the global pandemic, has your idea about the future you want changed since you wrote the piece?
My idea about the future is still very similar. I think that, if anything, we need to focus more on community efforts to support young people as a result of lockdown. Absence from school has widened the gap between the most disadvantaged students and the rest of the student body, which will affect academic achievement and well-being. Young people have been isolated at home, away from support systems, and many will have been exposed to domestic violence, poverty, or mental health problems, which can all become factors in drawing someone to violence or crime. It is essential that the support they need is there.