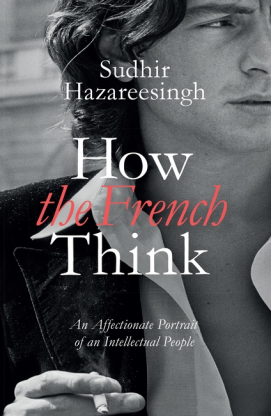 How the French Think

Sudhir Hazareesingh’s How the French Think is a warm yet incisive exploration of the French intellectual tradition, and its exceptional place in a nation’s identity and lifestyle. The French: orderly and anarchic, rational and mystical, arrogant and anxious, charming and exasperating, serious and frivolous, pessimistic, pleasure-loving – and, perhaps more than any other people, intellectual. In this original and entertaining approach to France and the French, Sudhir Hazareesingh describes how the French ways of thought and life connect to make them such a distinctive nation. One of the purposes of How The French Think is to convey the ideas of some of the most influential French thinkers of the past 400 years – Voltaire and Rousseau, Hugo and Michelet, Camus and Sartre, Lévi-Strauss and Foucault. Sudhir Hazareesingh is able to show how bold, imaginative and sweeping French thought is, how greatly it values high culture (in contrast to the English) and how it has given an almost sacred role to the writer – hence the prominent role of intellectuals in French collective life, and the intensity with which ideas are debated. The book explores the French commitment to rationalism and ideology, their belief in the State, their cult of heroes and their contempt for materialism. It describes their stylistic fetishes, their fondness for general notions, their love of paradoxes, their current fixations with the nation and collective memory, their messianic instincts and their devotion to universalism. ‘France’, claimed the historian Ernest Lavisse without a trace of irony, ‘is charged with representing the cause of humanity’. How The French Think ranges from Descartes to Derrida, and from big moral and philosophical issues to the symbolic significance of Astérix and the survival of the French language in a globalized world. Drawing on a colourful range of sources, and written with warmth and humour, it will appeal to all lovers of France and of French culture. Taken from and read more at https://www.penguin.co.uk/books/184683/how-the-french-think/#c3QayDq6CW5RiSLZ.99