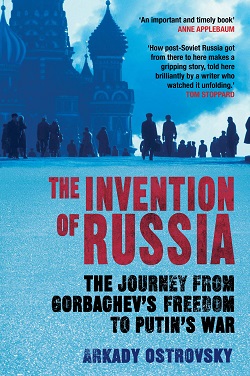 The Invention of Russia

In 1985 Mikhail Gorbachev launched Perestroika, opened Russia up to the world, ended the Cold War and gave his people freedom. The demise of the Soviet Union offered hope that Russia would become a ‘normal’, ‘civilized’ country, embracing Western values of democracy and the free market. Thirty years later, Russia emerged as a corporate state, overcome by imperial nationalism, fanned by its authoritarian president Vladimir Putin, who smashed the post-Cold War order and ignited a war on the borders of Europe. How did a country that liberated itself from seventy years of Soviet rule end up as one of the biggest threats to the West and, above all, to its own future? Why did the people who rejected Communist ideology come to accept state propaganda? In this bold and important book, Arkady Ostrovsky takes the reader on an enthralling journey from Gorbachev’s freedom to Putin’s war, illuminating the key turning points that often took the world by surprise.

The main characters are not politicians, however, but those who took charge of the media and the message and invented Russia’s dominant narrative. From the suddenly wealthy men who came to command the airwaves to the newspaper editors and TV directors, and from the Russian intelligentsia to the Kremlin spin doctors and ideologists, The Invention of Russia shows just how these figures shaped the country during the tumultuous post-Soviet transformation. As a foreign correspondent in his own country, Ostrovsky has experienced Russia’s modern history first-hand, and through original research and interviews he reveals the ideological conflicts, compromises and temptations that have left Russia on a knife-edge.

Taken from and read more at Atlantic Books.