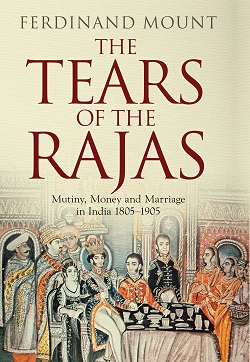 The Tears of the Rajas

Published by: Simon and Schuster UK

The Tears of the Rajasis a sweeping history of the British in India, seen through the experiences of a single Scottish family. For a century the Lows of Clatto survived mutiny, siege, debt and disease, everywhere from the heat of Madras to the Afghan snows. They lived through the most appalling atrocities and retaliated with some of their own. Each of their lives, remarkable in itself, contributes to the story of the whole fragile and imperilled, often shockingly oppressive and devious but now and then heroic and poignant enterprise.

On the surface, John and Augusta Low and their relations may seem imperturbable, but in their letters and diaries they often reveal their loneliness and desperation and their doubts about what they are doing in India. The Lows are the family of the author’s grandmother, and a recurring theme of the book is his own discovery of them and of those parts of the history of the British in India which posterity has preferred to forget.

The book brings to life not only the most dramatic incidents of their careers – the massacre at Vellore, the conquest of Java, the deposition of the boy-king of Oudh, the disasters in Afghanistan, the Reliefs of Lucknow and Chitral – but also their personal ordeals: the bankruptcies in Scotland and Calcutta, the plagues and fevers, the deaths of children and deaths in childbirth. And it brings to life too the unrepeatable strangeness of their lives: the camps and the palaces they lived in, the balls and the flirtations in the hill stations, and the hot slow rides through the dust. An epic saga of love, war, intrigue and treachery, The Tears of the Rajas is surely destined to become a classic of its kind.

Taken from and read more at: Simon & Schuster.