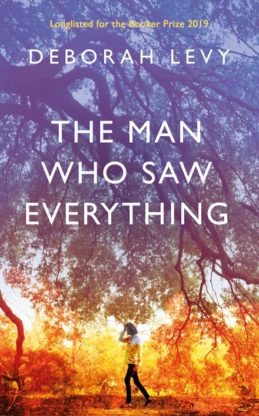 The Man Who Saw Everything

Deborah Levy is a British playwright, novelist and poet. She is the author of seven novels. Swimming Home was shortlisted for the Man Booker Prize 2012; Hot Milk was shortlisted for the Man Booker Prize 2016 and the Goldsmiths Prize 2016. Deborah is also the author of an acclaimed collection of short stories, Black Vodka (2013), and two ‘living autobiographies’, Things I Don’t Want To Know and The Cost of Living. She has written for the Royal Shakespeare Company and is a Fellow of the Royal Society of Literature.

Levy achieves the rare feat of combining the surreal imagery, symbolism and time warps of the dreamworld with a ruthless stripping bare of reality, creating a true elegiac feeling of loss for a life may not have lived up to any deep moral scrutiny but was still an entirely irrefutable part of the sum of human experience."