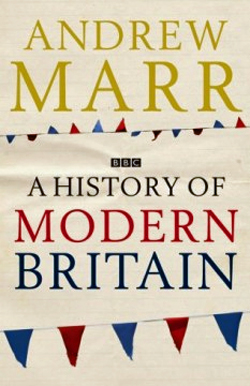 A History of Modern Britain

A History of Modern Britain confronts head-on the victory of shopping over politics. It tells the story of how the great political visions of New Jerusalem or a second Elizabethan Age, rival idealisms, came to be defeated by a culture of consumerism, celebrity and self-gratification. In each decade, political leaders think they know what they are doing, but find themselves confounded. Every time, the British people turn out to be stroppier and harder to herd than predicted. Throughout, Britain is a country on the edge – first of invasion, then of bankruptcy, then on the vulnerable front line of the Cold War and later in the forefront of the great opening up of capital and migration now reshaping the world. This history follows all the political and economic stories, but deals too with comedy, cars, the war against homosexuals, Sixties anarchists, oil-men and punks, Margaret Thatcher’s wonderful good luck, political lies and the true heroes of British theatre.