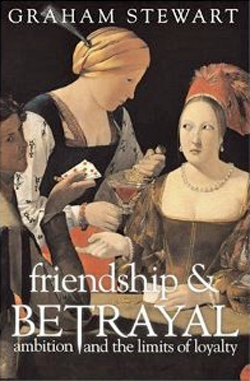 Friendship and Betrayal: Ambition and the Limits of Loyalty

Drawing on a wide range of historical examples, Graham Stewart explores the intriguing question of whether friendship can survive the pressures of public life. He examines in detail three relationships from across centuries and nations to illustrate how people in power cope with the pleasures and pitfalls of friendship in public life. His first example, Courtiers, tells the story of Queen Anne and Sarah, Duchess of Marlborough, and shows how the introduction of a new ‘favourite’ can ensure a powerfully jealous reaction from the long standing friend who is displaced. His second example, Revolutionaries, relates the tale of one of the United States’ greatest Founding Fathers, Benjamin Franklin, and his relationship with his longest serving political partner, Joseph Galloway. Here were two ambitious men whose friendship was broken in bitterness by divided loyalties during the American War of Independence. The third example, Liberals, brings us back to Britain and the friendship between Herbert Henry Asquith and his best friend Richard Burdon Haldane. Their relationship helped ensure that one became Prime Minister and the other Lord Chancellor, but as Stewart sums up ‘with success came harsh political necessities, and only one of them was marked out to pay the sacrifice.’ Indeed it is Stewart’s view that ‘great leaders usually find that when they reach the summit they are alone.’ We see how single-mindedness, indeed selfishness, appears a necessary quality in the scramble for preferment and how friendship can so quickly turn into rivalry. Incisive and thought-provoking, Friendship & Betrayal is a fascinating examination of an age old dilemma that continues to animate public life today.