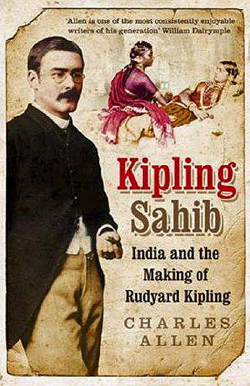 Kipling Sahib: India and the Making of Rudyard Kipling 1865-1900

Rudyard Kipling was born in Bombay in 1865 and spent his early years there, before being sent, aged six, to England, a desperately unhappy experience. Charles Allen’s great-grandfather brought the sixteen-year-old Kipling out to Lahore to work on The Civil and Military Gazette with the words ‘Kipling will do’, and thus set young Rudyard on his literary course. And so it was that at the start of the cold weather of 1882 he stepped ashore at Bombay on 18 October 1882 – ‘a prince entering his kingdom’. He stayed for seven years during which he wrote the work that established him as a popular and critical, sometimes controversial, success. Charles Allen has written a brilliant account of those years – of an Indian childhood and coming of age, of abandonment in England, of family and Empire. He traces the Indian experiences of Kipling’s parents, Lockwood and Alice and reveals what kind of culture the young writer was born into and then returned to when still a teenager. It is a work of fantastic sympathy for a man – though not blind to Kipling’s failings – and the country he loved.