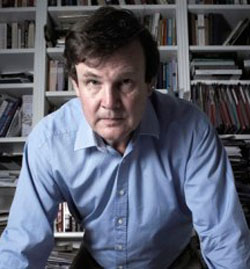 Longlisted for articles published by The Spectator and Daily Telegraph and broadcast by Channel 4 Peter Oborne is a journalist and author who joined The Telegraph in 2010 after writing for some years for the Daily Mail. He has also written for Prospect, The Observer, The Independent, the Evening Standard and the Sunday Mirror. His books include The Rise of Political Lying and The Triumph of the Political Class, and biographies of Alastair Campbell and Basil D’Oliveira, the latter being named the William Hill Sports Book of the Year 2004.
Submitted articles The great euro swindle What the papers won’t say The moral decay of our society is as bad at the top as the bottom Baroness Warsi was right to speak out: Hatred of Muslims is one of the last bastions of British bigotry Russia: Vlad’s Army Other links Peter Oborne on Journalisted