We can now reveal the thirteen books and thirteen journalism entries chosen by The Orwell Prize judges to go through to this year’s shortlists. The winners of each £3,000 Orwell Prize will be announced on Friday 25th June 2021 (George Orwell’s birthday).

The Orwell Prizes aim to encourage good political writing and reporting aimed at or accessible to the reading public. Winning entries should be of equal excellence in style and content, and the writing must live up to the values of The Orwell Foundation. Congratulations to all this year’s nominees, and a huge thanks to our panels.

The judges for The Orwell Prize for Political Fiction 2021 are: author, broadcaster and academic Delia Jarrett-Macauley (chair), former winner of The Orwell Prize for Moses, Citizen and Me; the historian and writer Andrea Stuart; Bea Carvalho, head fiction buyer at Waterstones; and Mark Ford, professor at University College London, author and poet.

Leave the World Behind by Rumaan Alam (Bloomsbury)

The Vanishing Half by Brit Bennett (Dialogue Books)

The Death of Vivek Oji by Akwaeke Emezi (Faber)

The Chair of Judges, Delia Jarrett-Macauley, commented: “With this shortlist we are excited to present a richly international array of novels, creatively inventive and intellectually astute fictional explorations, all of which grapple with big political issues – war, migration, poverty, refugees – and personal challenges such as the death of a child or the loss of a sibling. We are delighted to share this list of political fiction and hope readers will get immense pleasure from all of them.”

The Orwell Prize for Political Writing 2021

The judges for The Orwell Prize for Political Writing 2021 are: Anand Menon (chair), Professor of European Politics and Foreign Affairs at Kings College London and Director of the ‘UK in a Changing Europe’ initiative; Angela Saini, award-winning journalist and broadcaster, and author; Richard Ekins, Professor of Law and Constitutional Government at the University of Oxford; and Rosemary Goring, author and columnist  with the Herald and the Sunday Herald.

Labours of Love: The Crisis of Care by Madeleine Bunting (Granta)

Eat the Buddha: Life and Death in a Tibetan Town by Barbara Demick (Granta)

Our Bodies, Their Battlefield: What War Does to Women by Christina Lamb (William Collins)

The Interest: How the British Establishment Resisted the Abolition of Slavery by Michael Taylor (Bodley Head)

Anand Menon, Chair of Judges, commented: “Perhaps the highest praise I can give these authors, and their wonderful books, is that the panel had few doubts as to our decision, and are proud to recommend these books as the finest political writing published in the last year. Heartfelt congratulations to all these fantastic writers.”

The Orwell Prize for Exposing Britain’s Social Evils 2021, sponsored and supported by the Joseph Rowntree Foundation

The judges for The Orwell Prize for Exposing Britain’s Social Evils 2021 are: Paul Kissack (chair), Group Chief Executive of the Joseph Rowntree Foundation and previously a Director General in the UK Government on the national response to Covid-19; Ian Birrell, whose investigation into abuse in the NHS was awarded the prize in 2020; Professor Donna Hall CBE, chair of the national think tank New Local and the chair of Bolton NHS Foundation Trust; Director of Strategy and Policy for the Children’s Commissioner, Alice Miles; and Rianna Croxford, award-winning investigative journalist at BBC News.

‘Britain and the Pandemic‘ – Simon Akam (The Economist’s 1843 Magazine):

‘Lost to the Virus‘ – Sirin Kale (The Guardian)

Paul Kissack, Chair of Judges, commented: “This year’s shortlist for the Social Evils prize captures the most creative and powerful reporting on social injustices in Britain today – with many of those injustices being brutally exposed and amplified by the global pandemic.  Each shortlisted entry not only makes us think more deeply about those underlying social evils, but does so with an artistry and a clarity that is in the best tradition of Orwell.”

The Orwell Prize for Journalism 2021

The judges for The Orwell Prize for Journalism 2021 are: Carrie Gracie (chair), former BBC China editor and author of ‘Equal: How We Fix the Gender Pay Gap’; Clive Myrie, multi-award winning journalist, and broadcaster; Iain Martin, editor, publisher and co-founder of Reaction; Kamran Abbasi, doctor, and executive editor for content at the British Medical Journal; and Rosie Blau, editor of the Economist’s 1843 Magazine.

Carrie Gracie, Chair of Judges, commented: “Selecting six entries from such a strong longlist was no easy task. Spanning video journalism, podcast and immersive online work, this year’s shortlist honours both shoe leather reporting and sharp commentary. For illuminating the key political issues of our time and holding power to account, each of these names is a worthy contender for The Orwell Prize for Journalism.”

This is the third year that The Orwell Prize for Political Fiction, sponsored by the Orwell Estate’s literary agents, A. M. Heath, and Orwell’s son, Richard Blair, has been awarded. The prize rewards outstanding novels and collections of short stories first published in the UK that illuminate major social and political themes, present or past, through the art of narrative.

The Orwell Prize for Political Writing (previously, Orwell Prize for Books) is for a work of non-fiction, whether a book or pamphlet, first published in the UK or Ireland in the calendar year preceding the year of the Prize. ‘Political’ is defined in the broadest sense, including (but not limited to) entries addressing political, social, cultural, moral and historical subjects and can include pamphlets, books published by think tanks, diaries, memoirs, letters and essays.

The Foundation would like to thank all our our partners and sponsors, including the Joseph Rowntree Foundation, Richard Blair, A. M. Heath, The Political Quarterly, and University College London, home of the Orwell Archive, for their support in continuing to make these awards possible. 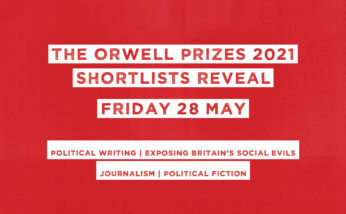