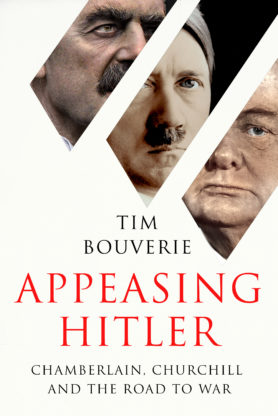 Appeasing Hitler: Chamberlain, Churchill and the Road to War

Tim Bouverie read history at Christ Church, Oxford. From 2013-2017 he was a political journalist at Channel 4 News, where he worked alongside Michael Crick, as his producer, and covered all major political events, including both the 2015 and 2017 General Elections and the EU Referendum. He regularly reviews history and politics books, and has written for the Spectator, Observer and Daily Telegraph. He has also for the last five years worked at the Chalke Valley History Festival as an interviewer.

We may think we know this subject, one of the most charged in our modern history, but this book contains details about machinations behind the scenes that will surprise and shock even the most historically aware.  Moreover, it is beautifully written."