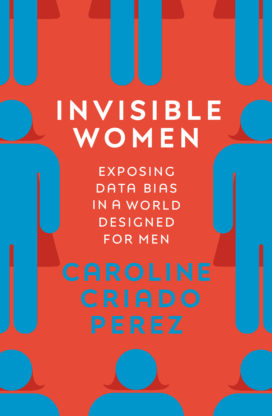 Published by: Chatto and Windus

Caroline Criado Perez is a writer, broadcaster and award-winning feminist campaigner. Her most notable campaigns have included co-founding The Women’s Room, getting a woman on Bank of England banknotes, forcing Twitter to revise its procedures for dealing with abuse and successfully campaigning for a statue of suffragist Millicent Fawcett to be erected in Parliament Square. She was the 2013 recipient of the Liberty Human Rights Campaigner of the Year Award, and was awarded an OBE in the Queen’s Birthday Honours 2015. Her first book, Do it Like a Woman, was published in 2015. She lives in London.

I thought I knew a bit about data bias but Caroline Criado Perez really opened my eyes in a book that also somehow also manages to be entertaining and easy to read. Discrimination against women really is hard-wired in some of our most important technologies and is not necessarily easy to fix."