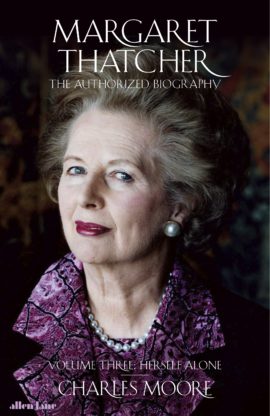 Charles Moore joined the staff of the Daily Telegraph in 1979, and as a political columnist in the 1980s covered several years of Mrs Thatcher’s first and second governments. He was Editor of the Spectator 1984-1990; Editor of the Sunday Telegraph 1992-1995; and Editor of the Daily Telegraph 1995-2003, for which he is still a regular columnist. The first volume of his biography of Margaret Thatcher, published in 2013, won the Elizabeth Longford Prize for Historical Biography, the H.W. Fisher Best First Biography Prize and Political Book of the Year at the Paddy Power Political Book Awards.

It may be the third volume of Charles Moore’s biography of Margaret Thatcher but Herself Alone can also stand in its own right as a beautifully crafted account of an important chapter in British political history. Magisterial, yes. But also lively and enjoyable throughout. Quite a feat."