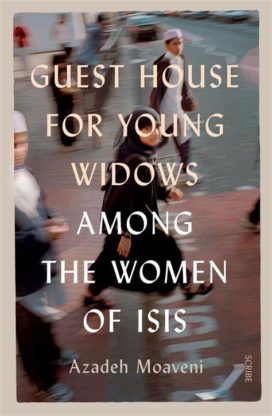 Guest House for Young Widows: Among the Women of ISIS

Azadeh Moaveni is a journalist, writer and academic, who has been covering the the Middle East for nearly two decades. She started reporting in Cairo in 1999 while on a Fulbright fellowship, and worked across the region for the next several years, covering Iran, Lebanon, Syria, Egypt, and Iraq. A Pulitzer finalist, she is the author of Lipstick Jihad, Honeymoon in Tehran, and co-author, with Iranian Nobel Peace Laurate Shirin Ebadi, of Iran Awakening, which has been translated into over forty languages.. She is Director of the Project for Gender and Conflict at the International Crisis Group and Lecturer in Journalism at New York University, London.

One of the tasks of political writing should be to challenge stock narratives, and this book manages it superbly, by taking the trouble to understand what drove 13 women, among them Shamima Begum, to join Islamic State, as well to describe their grim lives after arrival in the Middle East. It is a powerful corrective to War on Terror cliches, written as a page-turner."