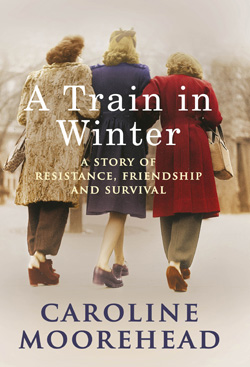 A Train in Winter:  A Story of Resistance, Friendship and Survival

On an icy dawn morning in Paris in January 1943, 230 French women resisters were rounded up from the Gestapo detention camps and sent on a train to Auschwitz – the only train, in the four years of German occupation, to take women of the resistance to a death camp.The youngest was a schoolgirl of 15, the eldest a farmer’s wife of 68; there were among them teachers, biochemists, sales girls, secretaries, housewives and university lecturers. Caroline Moorehead’s remarkable new book is the story of these women – the first time it has been told.It is about who they were, how and why they joined the resistance, how they were captured and treated by the French police and the Gestapo, their journey to Auschwitz and their daily life in the death camps – and about what it was like for the 49 survivors when they returned to France. Six of the women were still alive in 2010 and able to tell their stories. What they had to say – and this was confirmed by the children of those who died – was that great affection and camaraderie grew up among the group. They became friends, and it was precisely this friendship that kept so many of them alive.They supported and cared for one another, worked together, shared everything, watched out for each other and faced the horror together.Friendship, almost as much as luck, dictated survival. Drawing on interviews with survivors and their families, on German, French and Polish archives, and on documents held by WW2 resistance organisations, A Train in Winter covers a harrowing part of our history but is, ultimately, a portrait of ordinary people, of bravery and endurance, and of the particular qualities of female friendship. Taken from Vintage Books